Making a restaurant exciting, on the cheap

This post was inspired by an Eater.com story called Ten Ways to Make Your NYC Restaurant Less Boring. I decided to match their suggestions with examples from the past. I am presuming that author Greg Morabito had tongue in cheek when he thought up his ten tips, so I am doing the same. My suggestions have been tailored for present economic conditions. 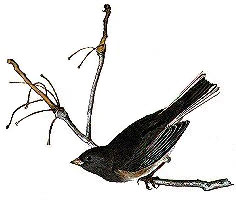 10. Hire a Forager – This is a great idea and bound to add interest. But go beyond greens. In 1884 an enterprising Chicago restaurant forager stalked snow birds (juncos) along the city’s cable car lines. Delicious on toast. Look around. Think pigeons!

9. Serve Whole Animals – Yes, and display them prominently. Dead animals – whole bears and bison — strung up around the entrance, and raw meat generally, have always been irresistible to restaurant goers. Live animals too. Keep in mind the 1941 restaurateur who took delivery of a giant sea turtle and stored in it the restaurant window for several days before putting it on the menu. Another idea: on those really hot days set up a few premier tables in the meat locker. 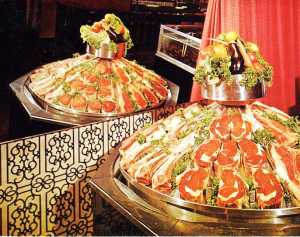 8. Hire a Chef from Portland – Or, whatever place is trendy at the moment. So happens in 1922 the management of the Mandarin Inn in the college town of Champaign, Illinois, went all the way to California to import a chef who could “give the students the best possible in Chinese dishes.” And, by the way, they don’t have to be from Portland literally. Many of the French chefs of the 19th century were from Germany and China.

7. Don’t Play the Same Music Everyone Else Plays – A children’s choir would be notable and might draw in parents and grandparents. As another entertainment idea, don’t rule out fortune-tellers. They are always a hit during economic downturns and will work for tips.

6. Give Your Guests Garlic Bread Instead of Regular Bread – Ok, but don’t overdo it. Just keep in mind some people are leery of garlic – and strange music, which they tend to associate, if Irvin S. Cobb is still to be believed. He ate in restaurants often, all the while longing for corn bread. He complained in 1913, “I have been howled at by a troupe of Sicilian brigands armed with their national weapons – the garlic and the guitar. I have been tortured by mechanical pianos and automatic melodeons.”

5. Start a Chef’s Counter – Make cooking your floor show. Consider hiring a man in a tuxedo to mix salads under a spotlight. Flames and knives are popular. I think public butchering is going too far but don’t be afraid to bring some of the behind-the-scenes jobs out front, such as dishwashing. This hasn’t ever been done that I know of.

4. Invest in a Serious Mixology Program – A good bartender can come high, so don’t underestimate the appeal of great cocktail names, especially during election season. Try updating some used at Brigham’s Oyster House and Restaurant in Boston in the 1830s, 1840s, and 1850s, such as Fiscal Agent, I.O.U., and those that commemorated politicians and political events, like Free Soiler, Clay Smash, and Webster Eye-Opener. Mr. Brigham retired very, very rich.

3. Invest in a Serious Coffee Program – I like the idea of a coffee sommelier, and you can definitely charge more for your coffee drinks this way. If you’re going to do this you absolutely must not use instant coffee. Ever. Not even if you have one of those instant coffee machines with the beans showing on top.

2. Serve More Vegetables – Given the high price of farmers’ markets, it makes sense in these tough times to look for ways to reduce costs. The advice given in the June 1968 edition of Cooking for Profit still makes sense. No one can tell you’re using canned vegetables if you encase them in gelatin. And please, describe your creation as “en gelée.”

1. Offer a Great Deal Every Night of the Week – A few deals used in previous downturns that are ripe for recycling: offer free second helpings, especially of gelatin; no charge for (gelatin) desserts; sell meal tickets to frequent diners; decorate with antiques – that are for sale; hold poker tournaments during the afternoon cocktail hour; invite celebrities to eat for free if they agree to wear their best clothes.

5 responses to “Making a restaurant exciting, on the cheap”