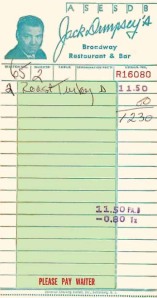 Since this post is about server dishonesty I’ll start off with a couple of disclaimers. First, I don’t mean to imply that all, or even most, servers – or kitchen staff – are dishonest. Also, the stories I’ve found are mostly about men but I don’t take that to mean that men are more dishonest than women or that women are less skilled in larceny and chicanery then men.

The history of servers and kitchen staff cheating and stealing reveals an extraordinary degree of laxity in restaurant management, which did not begin to change significantly until the Prohibition era when the idea of system and efficiency took hold in some eating places, especially chains.

For most of the 19th century and well into the 20th many restaurants operated on a cash basis and kept no records whatsoever. Servers didn’t even use written customer checks. Under a (non)system such as this, exemplified in restaurants such as Gonfarone’s in Greenwich Village as described in the book Papa’s Table d’Hôte, waiters needed little larcenous intent to end up with money that should have gone to the house. As author Maria Sermolino recounts, “even a waiter who tried to be honest might find his pockets unaccountably bulging with dinner money which, somehow, got confused with his tip money. There was so much of it pouring in, that everybody shared.” 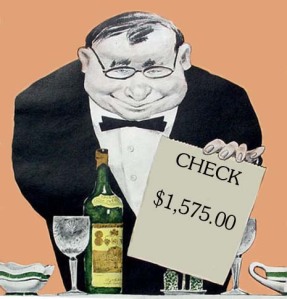 Waiters at Gonfarone also regularly made off with bottles of wine, roasts, and chickens, according to Sermolino, daughter of one of the restaurant’s owners. Her father refused to crack down on the practice, claiming that there was plenty to go around and if the waiters felt distrusted they would steal even more. A similar winking attitude evidently prevailed at the New York hotel described by Gay Talese in A Writer’s Life. There, in the 1950s, the waiters routinely did their daily grocery shopping from the kitchen provisions, taking home whatever was on their list. The practice was referred to as “valising” and was so strongly identified with the waiting occupation that the staff referred to each other as valises, as in “Who’s that new valise the chef just hired?”

Probably pilfering has gone on as long as there have been restaurants, yet complaints about it seem to begin with the influx of immigrant waiters in the later 19th century. Written checks and checkers who wrote down and totaled up whatever food orders waiters carried out of the kitchen came into use in some restaurants around the 1880s. Waiters were required to pay cash for their checks when they came on duty; at the end of the shift their used checks would be totaled and they would receive change and/or a commission if that was due to them.

The check-checker system was supposed to put an end to the days when waiters palmed off sirloin steaks as porterhouses, pocketing the difference, or colluded with patrons to charge 25 cents on the dollar for a meal and receiving a very generous tip in return.

At first checks weren’t always written in ink, numbered, or marked paid, permitting them to be altered, discarded and replaced, or reused – with the end result of unaccounted for cash going into the waiter’s pocket. But even when these gaps were remedied, the games continued. Food was held under the tray and smuggled out of kitchens right under the eye of the checker. Worse yet, for the patrons, their meals might be assembled, completely outside the system, from uneaten scraps left behind on the plates of departed diners. A penciled check would be presented, then erased after payment was taken.

As more safeguards were put in place, collusion became necessary. Waiters conspired with checkers who would leave certain items off the tally. At the Chicago’s World Fair, where waiters were required to buy a set amount of tickets each day with which to pay for food orders from the kitchen, the workers who collected the tickets resold them at a steep discount off face value to restaurant managers who then resold them to waiters at a discount. The syndicate of ticket takers, managers, and waiters all made money at the expense of the Fair’s restaurant concessionaires.

Bartenders, too, have enjoyed lucrative schemes, such as pouring drinks from their own bottles of liquor and keeping the payments. Proof that larceny behind the bar hasn’t ended is found in a 2009 book The Hungry Cowboy. Its author Karla Erickson reveals how a bartender in collusion with a server and an assistant manager diverted a significant amount of cash by ringing up a large number of sales as voids. The manager noticed liquor costs rising in relation to receipts but didn’t investigate further until his usual sales bonus was withheld.

The beat goes on. Computerized orders and credit cards have created new barriers but have not, I have no doubt, foiled cheating completely.