Famous in its day: Pig’n Whistle 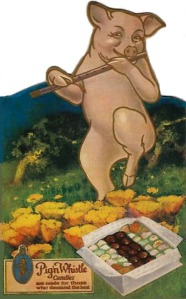 One of the strange appropriations of the early 20th-century involved using old tavern signs and names for distinctly non-alcoholic eateries, often tea rooms or confectionery restaurants appealing primarily to middle-class women. One of these was the Pig’n Whistle chain which began in California in 1908.

The name originated with ancient British taverns. Many believe that “whistle” was a corruption of wassail, an alcoholic concoction drunk from a small bowl or cup called a “pig.” But an early advertisement for Pig’n Whistle (shown below) gives no suggestion that patrons could get anything stronger than a cup of tea.

Although there is some disagreement about whether Pig’n Whistle started in San Francisco or Los Angeles, it seems likely that the first one was opened in San Francisco by Frank L. Callebotta, in 1908, perhaps growing out of a candy store he established earlier. In 1912 there was one unit in downtown San Francisco and another in the H. C. Capwell department store in Oakland. [top of page: early view of a window at the Oakland Pig’n Whistle, from the collection of Albert E. Norman]

By December of 1908 there was a store in Los Angeles, the city that was destined to become the chain’s headquarters. In 1914 the third LA Pig’n Whistle opened on South Broadway with an ivory baked enamel front displaying the trademark fife-playing pig which also decorated interior walls. In 1916 Pig’n Whistle was known for hanging original artworks on the walls, a custom it would continue into the 1930s. Patrons liked the idea so much they asked to be seated in booths where their favorite paintings appeared.

In 1926 the chain made a public stock offering and began an expansion drive. It absorbed Melody Lane restaurants in Los Angeles and Ennor’s in Berkeley. By 1929 it had opened its 20th store and had restaurants in Seattle, San Francisco, Oakland, Pasadena, Hollywood, and Los Angeles, including one planned for Grauman’s Egyptian Theater. It acquired the Mary Louise Tea Rooms as part of its Elite Catering subsidiary. Operating three factories, it made its own baked goods, candy, and ice cream. In 1931 passengers traveling on Transcontinental-Western Air, Inc. out of LA and San Francisco had lunches furnished by Pig’n Whistle. 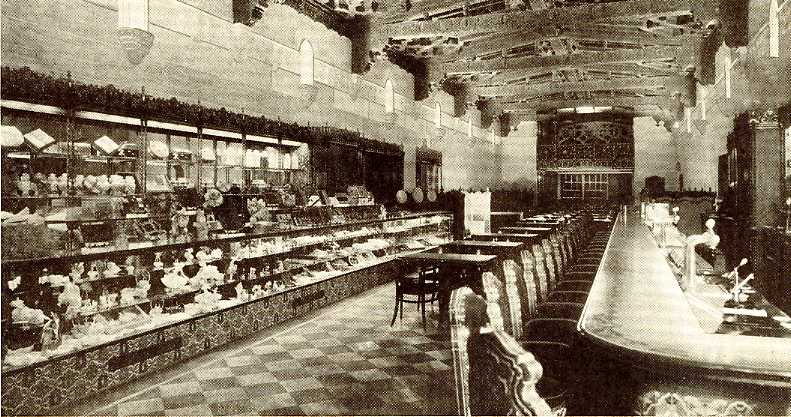 Pig’n Whistles made a specialty of appealing to children and created menus and booklets for them. Although the restaurants were casual, they were also considered refined and somewhat elegant. Menus were elaborate even though prices were moderate. In 1934 it was possible to order a “De Luxe” six-course dinner for $1.00 that included dishes such as “Braised Saddle of Rabbit, Chasseur” and “Grilled Boned Loin of Spring Lamb” with fresh mushrooms and mint jelly. The dinner came with additional courses and accompaniments such as seafood cocktail, soup, spaghetti, avocado salad, and asparagus Hollandaise. To finish, there were 23 desserts to select from.

Profits declined in the 1950s and the chain shrunk. In 1952 it was reduced to five locations in LA and Hollywood, and one each in Beverly Hills, Pasadena, Long Beach, and San Diego. When an Illinois corporation, King Kastle, bought the company in 1968 there were only three units remaining, all in Los Angeles. King Kastle planned renovations and expansion but I don’t think they materialized.

Coming full circle, the name Pig’n Whistle can now be found on several drinking places around the country, as well as one of the original units at 6714 Hollywood Blvd. (interior pictured above) which has been restored and is operated as a restaurant.

40 responses to “Famous in its day: Pig’n Whistle”