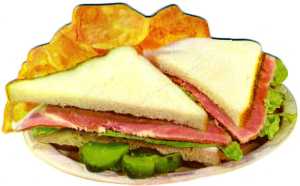 Because cured ham keeps for months at room temperature, it was always on hand in colonial and early American taverns. At any time of day and much of the night a hungry person could get the host to slice off a “cold cut” of ham. Ham and eggs was such a popular dish in eating places everywhere and at all times that many people have nominated it as America’s national dish.

Ham sandwiches were on tap at porter houses and went well with the dark brew as well as with ale (but what didn’t in those heavy-drinking days?). At New York’s Ring of Bells, host John Spencer advertised in 1807 that he furnished first-rate liquors, soups, and “Sandwiches, Anchovies and Relishes of every description.” Later many drinking places put out ham sandwiches as part of their free lunch spread.

Serve-yourself lunch counters of the 1880s were loaded with ham sandwiches, beef sandwiches, and pies. Customers grabbed what they wanted, often ate standing, and washed it all down with water or a hot beverage. At non-alcoholic dairy lunch bars, which featured fresh milk, coffee, and simple dishes such as beans, ham sandwiches cost 5 cents apiece. Wyman’s Sandwich Depot was famous throughout Boston for hefty sandwiches but a competitor in the 1890s claimed his sandwiches, on rolls 7 inches long and 5 inches wide, were larger. Also up and coming at the time were the lunch wagons that rolled onto city streets at night, vanishing in the daytime. They too specialized in ham sandwiches. But signs of change were on the horizon. Another lunch wagon specialty was the hamburger sandwich, destined eventually to trim the humble snack of ham between bread down to size.