Wayne McAllister’s drive-ins in the round

Architects who design restaurants often have labored in anonymity, and that goes ten-fold for those whose work involved drive-in restaurants. In the beginning drive-ins were simple shacks plastered with signs, as were other buildings of the early automobile age. Like the chicken coups converted to motor courts and the farmers’ fields rigged out for overnight camping, they served as temporary fixes for seat-of-the-pants entrepreneurs looking to make a quick buck from the passing traffic.

The couple of dozen Los Angeles drive-ins Wayne McAllister designed in the 1930s – the Wich Stand, Simon’s, Robert’s, Herbert’s, Melody Lane — were likewise ephemeral, tumbling into ruins with rising real estate values. Yet, despite the ephemerality of the form, he was one of the few designers who managed to develop a functional and aesthetically satisfying style for an inexpensive roadside building type. 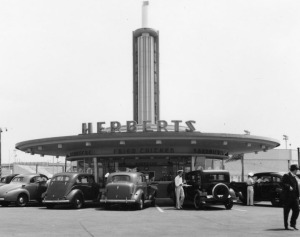 This post is based mostly upon Chris Nichols’ The Leisure Architecture of Wayne McAllister, a book that traces McAllister’s career and conveys his genius at transforming crude vernacular building forms into sophisticated expressions of car culture.

Born in San Diego, Wayne McAllister and his wife Corinne, then both 20, took on a major project in 1927 with the Moorish Moderne design of Agua Caliente, a Prohibition-era Tijuana gambling mecca. Wayne was a self-taught high school dropout whose first job was designing houses, a task he was able to execute handily. According to his own account, he regularly completed a new design each day. In the course of a roughly 30-year architectural career, his work focused on the design and remodeling of hotels and restaurants in Los Angeles and Las Vegas. Among his Las Vegas hotel projects were El Rancho Vegas, the Desert Inn, and the Sands Hotel, while a partial list of his LA restaurants includes Café Caliente, Mike Lyman’s, Richlor’s, Lawry’s, Clifton’s, and Bob’s Big Boy. From 1956 to 1961 he was an architect for the Marriott Corporation.

Although he is best known for the Sands, his circular drive-ins are considered significant in architectural history. Alan Hess, author of Googie, noted that thanks to Wayne McAllister, “Commercial vernacular design developed a respectable architecture that stands on its own right, not simply as a second-rate version of high art design.” It is interesting that even a lofty modern architect like Ludwig Mies van der Rohe developed a drive-in restaurant design, in 1945 (it was never built).

Wayne’s circular drive-ins typically had 20-foot pylons on the roof on which the drive-in’s name was spelled out, with horizontal louvers partially concealing neon tubes that made the signs glow. While his early designs had no doors – the businesses stayed open 24/7 and evidently had no need of heating or air-conditioning – this element was eventually modified. For a time his styles were influential, but after World War II when drive-ins expanded throughout the country, round buildings with overspread roofs were scrapped for rectangular structures from which long canopies stretched outward.