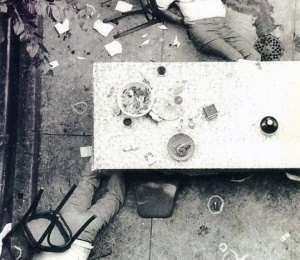 Gangster stories run like a red thread through the 20th-century history of American restaurants, from the speakeasies of the 1920s, to the shakedowns and union infiltration of the 1930s, the rackets of the 1940s and 1950s, and the later years of money laundering and loudly proclaimed legitimate business.

But what seems to interest Americans the most are restaurants mobsters are alleged to patronize, and all the more so if there has been a legendary shootout there.

As portrayed in the film Dinner Rush, even rumors that a restaurant is a gangland favorite can boost its popularity immensely. The film was made by Bob Giraldi who’s been inside the restaurant business.

On July 28 a series called Inside the American Mob will begin on the National Geographic channel. My friend and neighbor John Marks, supervising producer, inspired this post when he mentioned the popularity of restaurants where mobsters have been gunned down.

Violence is abundant in restaurant history. Two of the worst mass murders in the United States took place in restaurants, the killing of 23 people at Luby’s Cafeteria in Killeen TX in 1991 and 21 at a McDonald’s in San Ysidro CA in 1984. Those tragic events did not bring about an influx of patrons wanting to soak up evil ambiance. Quite the contrary. Luby’s remodeled and reopened but never regained the business it once had, closing the Killeen site for good in 2000. McDonald’s razed the blighted unit in San Ysidro, rebuilding nearby. 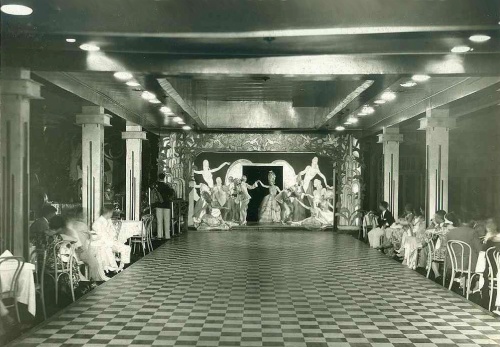 On the other hand, when gangsters are shooting victims people are unmoved, evidently figuring they got what was coming to them. The absence of bullet holes and bloodstains disappoints.

Restaurants that are linked to mobsters, such as NYC’s Sparks Steak House, where Paul Castellano was killed as he stepped out of his car, do not always appreciate being included in guide books such as A Goodfellas Guide to New York just because a mobster sometimes ate there. I can’t blame them. Who would want tourists dressed in shorts and tee shirts turning up at your high priced restaurant? The mob is not what it used to be. Yet I have to wonder, is there an American restaurant that can be absolutely certain it has never hosted mobsters?

I’ll also point out that not all mob-connected restaurants are or have been Italian. Also, probably every ethnic group has had its own version of the Mafia at some point. 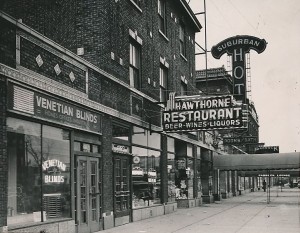 Most major cities in the U.S. have had restaurants that served as gangster hangouts. [pictured: the Cicero IL headquarters of Al Capone, ca. 1939] Chicago’s Colosimo’s was already in the books by 1930, ten years after its owner “Big Jim” Colosimo became one of the first victims of a gangland shooting in a restaurant. As late as 1958 when a new owner of the property announced he would raze the building, the site was overrun with an estimated 1,000 souvenir hunters. In the 1920s and 1930s even “nice” St. Paul MN could boast of four or five nightclub eateries with underworld associations, according to the authors of Minnesota Eats Out. Other mob-connected eating places illustrated in this post are Louigi’s in Las Vegas and Villa Venice outside Wheeling IL.