I have written quite a lot about automats, their origins in Germany, and where they have appeared around the country and the world. The automats run by the Horn & Hardart Company in New York, which began in Philadelphia in 1902, were undoubtedly the most successful and best known.

But automats did not do so well in other places. In Boston, The Automat Company of New England is pretty much completely unknown and I could not find a single illustration. (Boston’s automats were not part of Horn & Hardart Co.)

In 1916 the Automat Co. of New England’s first automat opened in a renovated building at 255-257 Washington, occupying the first floor and basement.

It’s difficult to say exactly who was behind this business, but evidently there were numerous investors, including a NYC bond merchant, a New England hotelier, Harvard College, a Philadelphia trust company, and a Boston realty company.

The company began advertising in Boston papers for help, running hundreds of advertisement for chefs, cooks, buss boys, dishwashers, porters, bakers, pie men, and mechanics. Applicants were directed to 40 Winchester Street, which was the central office and commissary where food was to be prepared for the branches that would soon open.

Next, the company hired a general manager and began running advertisements for leases on new locations containing “not less than 4,300 square feet floor space with basement preferred.” Soon it had five: 2 High st., 40 Court st., 234 Huntington ave., 255 Washington, and 32 Franklin, as well as its headquarters on Winchester. As might be expected, the cost of installing automat equipment in the five locations was high.

By early 1919, the company was insolvent and operating only three locations. Receivers were appointed by the court. A story in March revealed that the company owed a serious amount of money to its creditors: $103,789. In August, the commissary and the remaining four locations were auctioned, including all equipment, furniture, stock, and patent rights.

The Waldorf Lunch System, which ran about 24 lunchrooms in the Boston area, acquired the assets of the Automat Company. They continued to run at least one of the locations as an automat, 234 Huntington, until they auctioned the restaurant in June 1924.

Waldorf ran a second automat in the 12-story Little Building on Boylston Street. Since this had not been a location of the Automat Company, Waldorf must have moved automat equipment they acquired in the auction to this address. But, in 1924 they converted this automat into a “modern cafeteria,” saying that they would now be able to handle an additional 50 customers at a time, as well as to expand the menu to include steaks, chops, roasts, and even oysters, cooked by “special chefs” who would provide “regular first-class hotel cooking.” The change was seen as a substantial upgrade.

It sounded as though Bostonians weren’t shedding tears over the disappearance of automats in their city.

It seems to beg the question of why NYC’s automats were celebrated and became objects of nostalgia.

Automat is a word still in use in Germany, meaning a vending machine. And if you think about it, weren’t the old H&H automats simply large vending machines with people working inside of them?

The ups and downs of Frank Flower 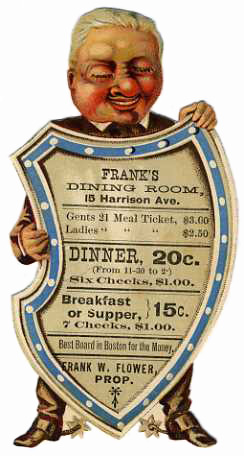 Everyone knows that being a restaurant proprietor is chancy. This is amply illustrated in the life of Frank Flower, born in England in 1854, and working as a Boston waiter in 1878. He staked his career as a restaurateur on Harrison Avenue in Boston where he ran a restaurant from about 1880 to 1895, moving twice.

The reason for his failure in 1895 is unknown, but it may have had something to do with shifts in the neighborhood beginning just as he opened at 13-15 Harrison in 1880. That was the year that the first property lease was made to a Chinese person in Boston, on Oxford Place, very near to Frank’s restaurant. Frank had catered to patrons whose tastes ran to fish balls and baked beans. But, little by little by the 1890s Harrison would become a business street in Boston’s Chinatown. Boston’s first Chinese restaurant would open at 36½ Harrison in 1890.

In 1882 Frank advertised that he sold a week’s worth of meal tickets to men ($3) and women ($2.50). He also had rooms for rent, both “box rooms” and “side rooms.” I remember some years ago when I read about single working people who rented small kitchenless rooms in Boston’s South End in the 19th and early 20th centuries. While visiting a friend’s apartment in that area one day, I suddenly realized that her cramped and oddly-shaped three-room apartment was in fact made up of one box room and two side rooms. 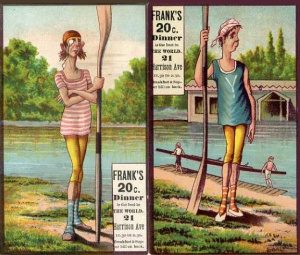 By 1884 Frank was doing well enough to buy a nearly new 11-room Queen Anne house in Dorchester. He moved his restaurant to 19-21 Harrison about then. That location soon became problematical when the block was sold off to a developer who planned to raze the buildings and construct a large office building.

That same year, 1890, Frank won the contract to feed 10,000 Civil War veterans coming to Boston for a week-long reunion. In other words, he would need to furnish about 210,000 meals in the space of a week, rather than his usual not-too-shabby 10,500.

Though he claimed he nearly went crazy making all the arrangements, Frank felt confident he could handle the job by feeding 2,000 diners in five shifts for each meal. He contracted with a local baker for bread and the all-important baked beans; bought 3,000 new plates; had all the meat delivered to his door in a refrigerated car by Armour Co. of Chicago; bought four immense boilers that would steam 2,400 eggs at a time; hired 100 waiters; found a professional coffee maker who would turn 9,000 pounds of beans into endless streams of hot coffee; and paid 35 scullions to clean up. When the encampment was over the G.A.R. executive committee commended him on how well he had fed the multitude. 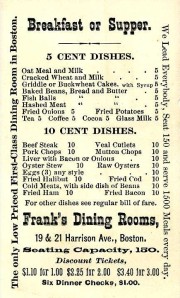 Frank’s Dining Room moved to 79 Harrison in the early 1890s, just about the same time that his original location became a Chinese store. But soon he hit the wall, declaring in 1894 that he was unable to pay his bills. His Dorchester mansion went back on the auction block.

Following his fall, he continued in the restaurant business as manager of Munro’s restaurant on Eliot Street. Always fond of boastful advertising, the irrepressible Frank took out newspaper ads claiming “1000 boarders needed” and “dinner, 20c, the finest on earth.”

In the decades after Frank left Harrison Avenue, Chinese restaurants such as the Chinese Royal and The Red Dragon took over several of his locations.