Anatomy of a corporate restaurant executive 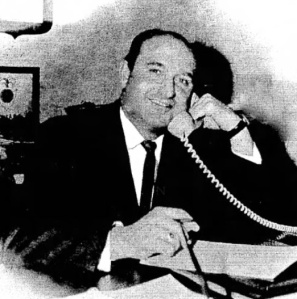 It strikes me that much more has been written about and by chefs than those restaurant personnel who mostly work behind a desk. Business people lack the glamour of knife wielding chefs. They are not surrounded by flames. They have no dishes named after them.

But Frederick Rufe’s career in restaurants was as interesting as many chefs’ and he was undoubtedly more influential in shaping the dining experiences of countless restaurant patrons over his career of nearly 40 years. His entire working life had a single focus. In a 1974 interview he stressed, “Everything I’ve ever done has been with food.” As a management executive he was closer to the soul (or soullessness, depending how you see it) of both the upscale and the midscale American corporate-owned restaurant of the 1960s and 1970s.

Born in New Jersey in 1922 he came from a humble background, growing up in a one-parent household with his mother, who was a factory worker, and a brother. While a student at a teachers’ college, he spent one summer as a waiter for a Pennsylvania resort, leading him to detour from a teaching career to one in food service. Following WWII army duty (working in food supply), he obtained a degree from Cornell’s School of Hotel Administration, which excelled in turning out top hospitality industry executives.

He then went to work in Miami Beach as food and beverage manager at large hotels there, among them the Monte Carlo, Algiers, and Deauville. He was not shy about promoting himself. Aiming for a catering manager job in a hotel without such a position, he “invented” it for himself. He took over a vacant room, bought a desk, put up draperies, and hung out a “Catering Manager” sign. When challenged by his boss, he successfully convinced him that the hotel needed someone – him – in that position.

He joined Restaurant Associates in New York in the mid-1950s as the company was entering its most creative phase. RA was going from managing coffee shops and cafeterias to developing theme restaurants, some in the luxury class. In 1956 Rufe was made general manager of RA’s Newark Airport restaurants which included the famed Newarker, its kitchen headed by the inventive Swiss chef Albert Stöckli who would go on to the Four Seasons [pictured here]. Rufe helped develop the Four Seasons, the Forum of the Twelve Caesars, and La Fonda del Sol. At a time when out-of-season fruits and vegetables equalled the height of luxury, he obtained shipments of melons and new asparagus from the West for the Four Seasons, as well as miniature vegetables that allowed power-lunching VIPs to minimize awkward bites. With James Beard’s help he brought the blind cook Elena Zelayeta from California to plan Mexican and Spanish dishes for La Fonda del Sol.

Amiable and worldly, Rufe could be mistaken for a European sophisticate. He was on James Beard’s holiday dinner guest list, and had easy access to the food columns at major newspapers where he promoted RA’s restaurants with recipes and interviews. While manager of the Latin-themed La Fonda del Sol, he explained to a reporter that a “broiling wall” of revolving stuffed flank steaks was based on a setup he had observed at an inn in Peru on a menu-collecting tour of South America with La Fonda’s chef John Santi. He was known for focusing on detail, so much so that his travel notes were said to look like research for a doctoral dissertation.

In 1964 he took on the task of rescuing the Top of the Fair, a failing de luxe restaurant atop the Port Authority’s heliport building adjoining the World’s Fair grounds. He was made a RA vice-president in 1967 and two years later put in charge of food operations at LaGuardia and Kennedy air terminals, as well as other airports in the Northeast. “Our places are genuine restaurants,” he insisted, “not just places to grab a quick meal and dash to your plane.”

After a shift in RA’s direction, Rufe left for the Marriott Corporation where he was soon made VP of its dinner house division of moderate-priced theme restaurants in the DC area. The recession of the 1970s was on and Rufe explained in the press that Americans wouldn’t pay for $25 French dinners any more. Marriott’s new dinner houses were geared to more modest lifestyles. Phineas Prime Rib, Joshua Tree, Franklin Stove, Port O’Georgetown, and Garibaldi’s were management-driven eating places where every detail was arrived at through consumer research and economic calculation. Lunch was not profitable, so dinner only. No reservations because that resulted in less than 100% occupancy. Short menus with only America’s favorites, beef and seafood. All-you-can-eat salad bars. Fireplaces and ceiling beams evoking old-time hospitality. Friendly college student servers speaking from scripts. Cooking by step-by-step recipe cards. No chefs.

At first the formula was wildly popular with modal guests – suburbanites with $15,000 annual incomes who ordered $6.95 meals and cleared out in 1.5 hours. “Seventeen million dollars and no chefs,” Rufe boasted in January of 1975. However, by 1978 competition was up and profits were down. Marriott decided to sell off its dinner house division and some of the restaurants closed under the new owner.

After a few years as director of food and beverage planning and development for Hilton International, Rufe retired, returning to Stroudsburg PA where he continued as a consultant.

Needless to say, the chain dinner house formula he helped develop prevails today, demonstrating that there is a sizable market for restaurants with pleasant decor, parking, clean bathrooms, and palatable fare that is affordable.

(In)famous in its day: the Nixon’s chain 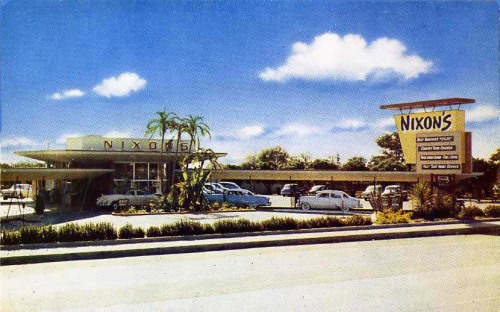 Since the 35th anniversary of Richard M. Nixon’s 1974 resignation from the presidency was commemorated this past weekend, it’s as good a time as any to focus on his brother Donald’s brief career as a restaurateur in Southern California. In the short span of five years in the 1950s, Don managed to go out of business while doing some serious damage to brother Richard’s political fortunes.

He got into several pickles but the biggest issue concerned a 1956 loan of $205,000 he received from Howard Hughes’s tool company to rescue his failing restaurants. Richard Nixon was VP in the Eisenhower administration at the time. Although Don denied that his brother had any involvement in soliciting the loan, critics were not convinced and persisted in raising questions about several decisions the government made that were beneficial to defense contractor Hughes. The toxic issue dogged Nixon in his unsuccessful 1960 presidential campaign against John Kennedy and again in his failed 1962 California gubernatorial run. 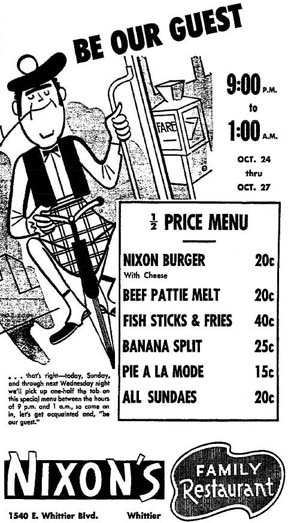 The chain of five Nixon’s restaurants began modestly in 1943 when the Nixon family’s grocery store, established in 1922 by father Francis Nixon in Whittier, added a coffee shop. Although Don was involved in running the coffee shop, his first real business venture took place in 1952 when he opened a drive-in on East Whittier Blvd. (shown above). Two years later he opened Nixon’s Family Restaurant, also on East Whittier, home of the “Nixon Burger” whose unfortunate, opportunistic name would be used to taunt Richard Nixon during his two terms as President. Next Don opened a drive-in near Disneyland, in Anaheim, and a restaurant and bakery in Fullerton. In 1957, despite the Hughes loan and proceeds from the sale of Nixon’s Market to a supermarket chain, Don Nixon put all five restaurants up for sale to settle the chain’s debts.

The Nixon’s at 822 E. Whittier became a Whirly’s Drive-in, which itself went out of business in 1962 or early 1963. The Anaheim Nixon’s, at Harbor Blvd. and Katella Ave., was taken over by the Harris chain of Portland OR in 1958 after it was remodeled to include a cocktail lounge. Cocktails had been prohibited in the Nixon’s restaurants judging from a 1954 ad which proclaimed, “Since children are most welcome at Nixon’s – liquor is never served.”

In subsequent years as President, from 1969 to 1974, Richard Nixon kept close tabs on Don. At one point he had the Secret Service wiretap his phone. Richard also found Don a job that he hoped would keep him out of trouble. In 1970 staunch Republican J. Willard Marriott, founder of the Hot Shoppes and CEO of the Marriott Corporation, agreed to do the President a favor. Marriott appointed Don vice president in charge of franchises and acquisitions on the West Coast. Marriott officials denied that Don had any influence in helping the company win government contracts.