It seems that everyone has heard that truck drivers know all the best places to eat along the highway. [John Vachon, Farm Security Administration photo]

It also seems that no one believes it and never has. I suspect that the rumor was created by magazine writers so that they could debunk it. For instance, a writer in 1951 described the belief as “one of the most insidious myths in the folklore of American travel.” Anyone who is gullible enough to follow a truck to a restaurant or diner, he wrote, can expect to end up with “an acute case of gastritis and an awesome respect for the incredible powers of survival exhibited by the U.S. truck driver.”

Few truck drivers have claimed to know the best places to eat. For drivers of 18-wheelers, eating, like everything on the job, has to fit into a punishing schedule if he/she wants to make money. About the only places a driver can stop are those with diesel fuel, big parking lots, and handy locations. Everything else is secondary, including food, which leads to heavy use of antacids and sentiments such as “I wouldn’t feed some truck stop food to a dog.”

Another aspect of restaurant-ing in trucker world is a breakdown of meal categories. Meals become interchangeable and can take place at any hour in a revolving day and night work schedule. Is 3 a.m. breakfast, lunch, or dinner time? 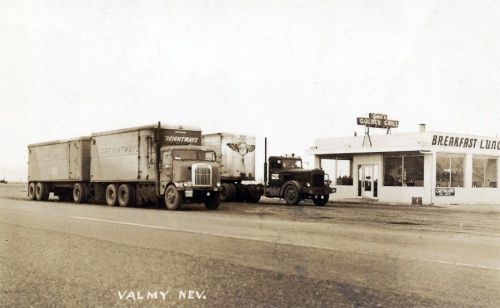 Reputedly truckstop patrons might encounter fluffy biscuits and fresh vegetables now and then, but I have the sense they were/are the exception. Overall, accounts point to dismal food choices. One of the worst examples was given in a 1962 story that described deep-fried chicken with a coating of cracker crumbs: “You strike a chicken leg and the crust falls away in a curved sheet to disclose a sight best forgotten.”

Although drivers would have been wise to follow the advice to “Never order anything fried at a truckstop,” many plunged ahead with chicken-fried steak smothered in cream gravy. Along with bacon and eggs and hash browns, chicken-fried steak held a high place on truckstop menus. Does it still?

Occasionally truckstop restaurants bought locally and did their own baking, though you can bet that most of the time drivers ate the same fare they hauled in their refrigerated trucks: frozen food. Nonetheless, some stops were known for their specialties. A 1969 guidebook recognized the 350 best truckstop restaurants, among them The Platter Restaurant in the Bosselman Truck Plaza near North Platte, Nebraska, that featured a parchment menu with catfish and “pastel fruit plates”; a New Mexico stop offering Mexican food; and a New Jersey truck plaza with a Ranch Hand Special of three eggs, three pancakes, and two ham steaks, all for $1.75 in 1970.

Earlier, in the 1930s and 1940s when long-haul trucking became established, truckers traveled on state roads and stopped at now-nostalgic though often mediocre “mom and pop” cafes. But with construction of interstate highways and vastly more trucks on the road by the 1960s, their limited hours and small parking lots could not handle demand. Roadside restaurants grew into full-service truck plazas, complete with motels, stores, laundromats, and 24-hour restaurants.

But whether eating took place in a small stand-alone café or a 200-seat restaurant in a 14-acre plaza, three constants held true. Waitresses had to be friendly and food had to be inexpensive and plentiful. The third? Coffee had to be strong. In truck driver slang, a restaurant was a “coffee pot” and coffee was “diesel fuel.”

Truckstop eateries have made up a significant part of the country’s restaurant industry. In 1977 Restaurant Hospitality magazine listed the Ohio 70-37 truckstop in Hebron OH as one of the biggest grossing independent restaurants in the U.S, despite its low check average of just $1.14 and the fact that all its revenue derived from food sales. (Needless to say, cocktails and 80,000 lb trucks are a bad combination.) According to Ron Ziegler, former Nixon press secretary and then-president of the National Association of Truckstop Operators, in 1986 truckstops were surpassed only by fast food chains as “the largest feeders of the United States.”