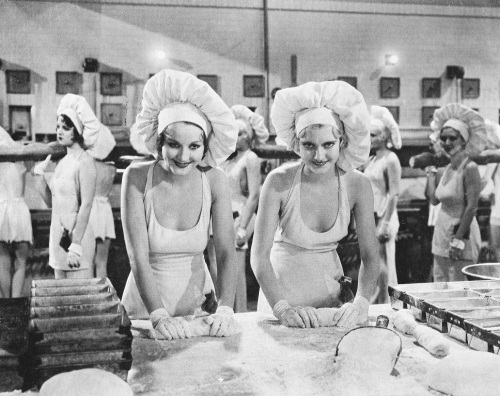 Unless, maybe, they wear swimsuits to work?

Until the later 20th century when women began to break the stronghold of the male chef, it was said women simply could not handle the job of running a restaurant kitchen. What follows are the reasons given by people associated with restaurants of the 20th century.

Most of the opinions recorded here were expressed by men, but a few were by women (sigh).

1906 – Women lack accuracy using flavorings and condiments – Women do not have the right temperament, they lose their heads. – Women could not stand the strain of hard work. – They are not managers. – They do not practice economy. – They lack patience and delicacy. – They are not as orderly as men in the kitchen. – They cannot rise to the occasion in a crisis. – They cannot organize the work of a kitchen.

1912 – Women are not particular enough to make a perfect dish.

1913 – They would become rattled and go to pieces if they had to handle the responsibilities of chef. – They go off on a tangent when things are not as they should be.

1931 – The duties are too strenuous for them. – They could not handle an elaborate menu. – They cut meat the wrong way. – They don’t make gravies and sauces properly.

1942 – The great chefs have always been men . . . [so there must be a good reason why] – There are scarcely any women gourmets.

1957 – Women can’t handle work in a restaurant kitchen either physically or mentally. – They lack discipline. – They make changes based on their own likes and dislikes.

1965 – Men have more of an inner potential for good cooking then women. – If cooking for a very large number of people a woman would probably break down crying and run away.

15 responses to “Women chefs not wanted”