Turkey on the menu 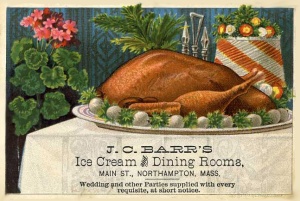 In previous years I’ve written about restaurants serving Thanksgiving dinners and about the special meaning of Thanksgiving to Chinese restaurant workers. Obviously Thanksgiving is about much more than turkey, but I found myself wondering how turkey has figured on restaurant menus the rest of the year. My first thought was that it is rarely seen in restaurants but I discovered that isn’t entirely true.

Turkey by the slice was seasonally available in taverns of the colonial and early-American eras. In 1800 NYC eating places put up pots of preserved turkey wings for sea voyages. Roast turkey was among the delectable dishes at Julien’s in Boston about this time.

Whole roast turkeys were part of the English tradition which prized big chunks of meat and fowl ready to carve up. Before the Civil War they were a staple of American plan hotels where copious meals were included with the room charge.

Although turkeys fell in the culinary category that one critic would later call “great vulgar joints,” they could be gussied up if boned and covered in aspic. Boned turkeys occasionally appeared on the menu of fine hotel dining rooms, such as Boston’s Tremont House. In 1843 the hotel menu offered “L’Aspic de dindon sur un socle, garni d’atelettes,” i.e., a pedestal on which rested a turkey in aspic decorated with little ornamental spears stuck into it.

The boning operation, performed from the uncooked turkey’s neck, wing tips, and drumsticks by loosening the flesh from the bones with a long knife, required great skill. According to directions published in 1860, after all the loosening was done, the person was to “take the turkey by the neck, give it a pull and the whole skeleton will come out entire … as easily as you draw your hand out of a glove.” The result resembled a deflated football which was then restored to turkey shape with stuffing and roasted.

Boning turkeys was a specialty of confectioners and caterers, including Afro-American Thomas Downing who prepared them during the holidays.

But generally turkey did not find favor with luxury restaurants that featured French cuisine in the later 19th century. Game birds were more highly prized. It remained plentiful on menus of everyday eating places and was popular enough that a 1902 restaurant run by Seventh Day Adventists offered a meatless turkey substitute. I wonder if it resembled “tofurkey”?

In ordinary lunchrooms turkey usually cost a little bit more than other dishes served around the turn of the last century. At the Electric Restaurant at the Chicago World’s Fair in 1893 a diner could have Roast Beef with Potatoes for 45 cents, while Stuffed Turkey and Apple Sauce was 50 cents. Cheap turkey could be hazardous. As a waiter revealed in 1908, “When you get young turkey with cranberry sauce, mashed potatoes, celery, bread, butter, coffee, and mince pie for the sum of 25 cents, you can figure that something was wrong with the turkeys.”

Turkey burgers might seem like recent inventions but in fact they were found in California restaurants as early as 1938. Storing, roasting, and slicing turkey, as well as dealing with the carcass was a nuisance to restaurants, so turkey sandwiches were something of a rarity before WWII. In the 1950s boneless turkey rolls became available. They made it convenient for any restaurant to offer triple deckers with turkey (instead of chicken as previously) or turkey dinner specials with sliced white meat and gravy that undoubtedly came from a can.

A few restaurants, mainly those connected with turkey farms, have specialized in turkey, among them the 620 Club in mid-century Minneapolis: its owner grabbed publicity in 1944 by paying $6.20 a pound for a prize-winning turkey. Still, if you search for turkey recipes in books compiling the “great recipes of great restaurants” you may be disappointed by the absence of turkey dishes. I include a recipe for my favorite turkey dish, the famous open-face “hot brown” sandwich of toast and turkey covered with cheese sauce and bacon strips developed at Louisville’s Brown Hotel.

8 responses to “Turkey on the menu”