All the salad you can eat

The salad bar most likely developed from the Americanized version of the smorgasbord which, by the 1950s, had shed its Swedish overtones and turned into an all-you-can-eat buffet. The smorg concept lingered on for a while in the form of salad “tables” holding appetizers and a half dozen or so complete salads typically anchored by three-bean, macaroni, and gelatin. Eventually someone came up with the idea of simply providing components in accordance with the classic three-part American salad which structurally resembles the ice cream sundae: (1) a base, smothered with (2) a generous pouring of sauce, and finished with (3) abundant garnishes. Or, as a restaurant reviewer summarized it in the 1980s, “herbage, lubricant and crunchies.” 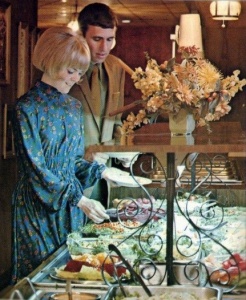 Whatever its origins, the salad bar as we know it – with its hallmark cherry tomatoes, bacon bits, and crocks full of raspberry and ranch dressings — became a restaurant fixture in the 1970s. Introduced as a novelty to convey hospitable “horn-of-plenty” abundance and to mollify guests waiting for their meat, it became so commonplace that the real novelty was a restaurant without one. Though strongly associated with steakhouses, particularly inexpensive chains, salad bars infiltrated restaurants of all sorts except, perhaps, for those at the pinnacle of fine dining. Salad bars were positively unstoppable at the Joshua Trees, the Beef ’n Barrels, and the Victoria Stations, some of which cunningly staged their salad fixings on vintage baggage carts, barrels, and the like.

Although industry consultants advised that a salad bar using pre-prepared items could increase sales while eliminating a pantry worker, restaurant managers often found that maintaining a salad setup was actually a full-time task. Tomatoes and garbanzos had a tendency to roll across the floor, dressings splashed onto clear plastic sneeze-guards, and croutons inevitably fell into the olde-tyme soup kettle.

The hygienic sneeze-guard came into use after World War II, first in schools and hospital cafeterias. Although a version of it had made its appearance in commercial restaurants in the early 20th century with the growth of cafeterias, many restaurants served food buffet style into the 1950s and 1960s without using any kind of barrier. The Minneapolis Board of Health required that uncovered smorgasbords either install sneeze-guards or close down in 1952, but it seems that their use did not become commonplace nationwide until the 1970s. Eklund’s Sweden House in Rockford IL thought it was novel enough to specifically mention in an advertisement in 1967. Massachusetts ordered them to be used in restaurants with buffets or salad bars in 1975.

On the whole salad bars went over well with the public – and still do — but by the late 1970s professional restaurant critics were finding it hard to hide their disdain. Judging them mediocre, some blamed customers who were gullible enough to believe they were getting a bargain. Others were wistful, such as the forbearing reviewer in Columbia, Missouri, who confessed, “It would be a nice change to get something besides a tossed make-it-yourself salad, and to have it brought to the table.” The trend at the Missouri college town’s restaurants, however, was in the opposite direction. In the 1980s Faddenhappi’s and Katy Station ramped up competition by offering premium salad makings such as almonds and broccoli while Western Sizzlin’ Steaks pioneered a potato bar.

3 responses to “All the salad you can eat”