For the longest time in the history of this country New Year’s eve and New Year’s day counted for very little as far as celebrations went. Restaurant-going didn’t come into the picture until the middle 19th century, and then only in a few selected places.

Charting the development of the holiday is no easy task, but one thing is clear: it was first celebrated in New York, beginning in the Knickerbocker era. Dutch communities introduced the custom of visiting on New Year’s Day. It was a home-based holiday, with women hostessing afternoon open houses with cakes, cordials, wines, and lemonade and men paying short visits.

In Boston, on the other hand, January 1 was just another day. Children went to school while adults worked, shopped, and went about their business. This pattern still held true there in the 1880s and even in 1919 Massachusetts was the only state that had not declared the day a legal holiday, although by then it was generally celebrated.

Gift giving on New Year’s was common elsewhere too, and it would appear that New Year’s day rivaled Christmas for gift exchange through much of the 19th century.

The 1850s saw an advancement in New Year’s day festivities, New Year’s eve still being mostly an occasion for rowdies to bang pots and pans in the streets. Washington DC and parts of California were beginning to celebrate with open houses and New Year’s cakes. Meanwhile, in New York City there was diminished enthusiasm about New Year’s. An editorial in the New York Herald complained of drunken men stumbling from house to house while hostesses had to put up with obnoxious strangers barging in. “They break the crockery, deface the plate, spoil the carpets, spill wine upon the ladies’ dresses, and altogether make beasts of themselves,” raged the writer, while the “lower million” brawled in grog shops where free drinks and food were on hand.

Through the 1860s and 70s celebrations slowly gravitated outside homes and into hotels, taverns, and restaurants. In Denver people gathered at the Tremont House and the Union Hotel on New Year’s eve for dining and dancing, and again the next day at the St. Louis Hotel for a “sumptuous dinner” and more dancing at residences and hotels. In Oakland CA, women received guests on January 1, 1874, while some men paid visits as others resorted to the free lunch tables such as that at Fennessy’s billiard parlor where a well-known restaurateur furnished a feast of “turkeys and truffles, Westphalia hams, elegantly garnished salads . . . and every appetizing substance imaginable.”

New Year’s day was also a time for reunions with fellow countrymen. In Rockford IL, those of Scottish descent gathered at Billet’s restaurant on New Year’s eve in 1891 for a 10:30 p.m. supper. 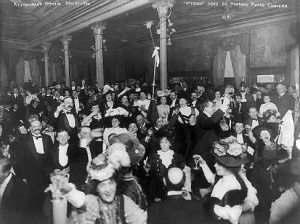 New Year’s 1900, signaling the change of a century as well as a year, marked a stepping up of celebrations, both on New Year’s day and, increasingly, on New Year’s eve. In Charleston SC, New Year’s day dinners in hotels and restaurants were said to equal Christmas feasting. In Portland OR in 1903 the day’s offerings included a 50-cent dinner at Rath & Sandy’s with raw Olympia Oysters; Consomme and Clam Broth; Boiled Halibut with Egg Sauce; a choice of Chicken, Duck or Roast Turkey; Shrimp Salad with Celery; and two kinds of dessert.

At San Francisco’s Techau Tavern, the 1909 menu for New Year’s Eve was considerably more fashionable, and rather than coffee or tea as in Portland, it was accompanied by Champagne.

Every year 20th-century celebrations in big cities seemed to get wilder, inspiring clergymen to denounce the festivities from the pulpit and call for police crackdowns on how late cafes and restaurants could serve drinks. [See Martin’s, NYC, ca. 1908 above]  The words “orgy” and “Bacchanalian” appeared in headlines. Chicago’s mayor in 1911 irritated a Sunday School Association by his refusal to enforce early closing laws, as well as his quip that he felt “only a slight tingling” from all the prayers offered for him. In 1912 New Year’s eve fell on a Sunday night, increasing protests from reformers. In San Francisco, some wondered, “Will the wild spirit with which San Francisco celebrated on Sunday night New Year’s eve be curtailed in the future, or will the Bohemians be allowed to ramble about at will on this one night in the year?” In Butte MT the warning went out in 1913 that anyone dancing the tango on a table top would be dragged off to jail.

As the American population went out to eat in restaurants more frequently after WWII, New Year’s eve dinners lost some of their attraction, especially as word spread that it was the worst night for food and service. Though I’ve found no figures on this, it seems to me that dining out on New Year’s day (apart from brunch) fell off even more, leading many restaurants to close on that day.

2 responses to “Greeting the New Year”