Selling prepared food ready to be eaten off the premises, known as carry-out or take-out, is as old or older than the restaurant itself. In Colonial days, James Hearn of New York City advertised that “families may every day be provided with plates of any dish, that may happen to be cooked that day, by sending their servants for the same.” In addition to full meals, early “restorators” and restaurateurs were also happy to deliver oysters and sweets such as freshly made ice cream, sherbets, and pastries.

After the Civil War, advertisements appeared offering “lunches put up” for travelers and tourists. Such ads became more common in the 1920s as many first-time car owners took to the roadsides for vacations and Sunday outings. With relatively few restaurants outside cities, the service was a welcome one. The ads continued into the 1950s in areas that attracted seasonal fishers and hunters.

For most customers, carry-out was an added service meant to accommodate them. Not so if the customer was Black, though. Under Jim Crow in Southern states, Black customers were unwelcome in dining rooms and at lunch counters – and could only obtain food to go (if that). 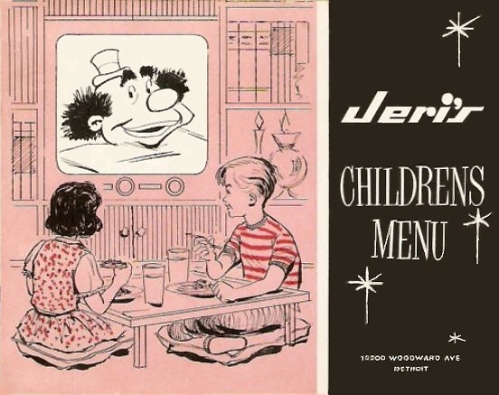 The post-World War II era produced not only a baby boom but also a television boom. TV-watching suburban families with young children fueled the advance of a carry-out trend in the 1950s and 1960s. By the early 1950s the restaurant industry realized it had a “television problem” keeping people from going out to restaurants, but found a way to deal with it. A restaurant consultant offered 2-day seminars detailing how smart restaurateurs were actually increasing business volume through carry-out. He explained for the slow learners that “people telephone in orders, pick up their food at a set time, then go home to eat before their television sets.” [menu shown is from a Detroit restaurant]

The carry-out trend was well established by the mid-1950s. A restaurant in New York’s Grand Central Station offered a commuter’s dinner, while an inn in Nebraska was set up like today’s fast food restaurants with a speaker post in the driveway for dictating orders and packaged food ready to go at the check-out window farther along.

In the 1960s certain foods achieved greater popularity with diners on the dash than with sit-down restaurant customers, particularly fried chicken and pizza. Other favorites were Chinese, Mexican, and barbecue. Regular “meat and three” dinners did not fill the bill, it seemed, plus fast food chains were able to deliver the goods faster. Why take-out orders are so common in Chinese restaurants, which do offer full meals, is still something of a mystery to me.

So, little wonder that in the early 1960s before adding indoor seating, McDonald’s dubbed itself “McDonald’s Carry Out Restaurant.” In 1963 the chain released a report claiming that one-fourth of all restaurant orders nationwide were “to go,” with drive-ins at the top and pizza parlors not far behind.

The popularity of food to go, already well established in the 1950s, was undoubtedly one of the factors propelling the growth of fast food eateries in that decade and the next.