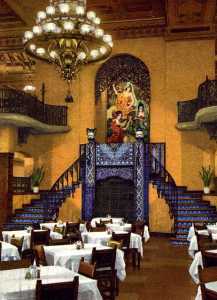 I put the word in quotation marks to acknowledge that what atmosphere in restaurants means is as elusive as air itself — which the word also refers to. It was often used to describe eating places in the 19th century, but not in a flattering way. A typical usage is that from 1868 where someone remarked that in a certain restaurant “the atmosphere is heavy with cooking vapors.”

The term atmosphere (or ambience, which came into use in the 1970s) became used in a more general way to describe the character of a restaurant – that intangible spirit of a place. The broader meaning could encompass an air that was sophisticated or homey, rowdy or relaxing, masculine or feminine, formal or casual, etc. I discovered a 1950s restaurant that claimed to have “Christian atmosphere” with home cooking by a Mrs. and “No Beer, Liquor or Smoking.”

In the 1890s the more general meaning almost always referred to the kinds of people associated with a restaurant, both owners and patrons. For example sawdust on the floor, pictures of athletes on the wall and the presence of prostitutes signaled a thoroughly masculine atmosphere while the presence of artists and writers in French, German, or Italian table d’hotes shouted “bohemian!”. A jolly host could also impart atmosphere, which might be altogether missing if he weren’t on hand, or if his most colorful patrons failed to show. 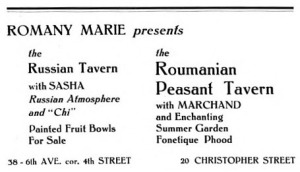 It didn’t take long before restaurant owners realized they could appeal to new patrons by bragging about their “atmosphere,” especially if it was bohemian. A San Francisco restaurant announced that it attracted “artists, writers, musicians, poets, painters, singers, draftsmen, balladists, literati and newspaper writers.” In 1903 NYC’s Elite Rathskeller Restaurant ran an advertisement claiming to have “Refined Bohemian atmosphere,” which sounds like a contradiction in terms since bohemians were supposed to be carefree souls who violated everyday norms of propriety.

The next step for restaurateurs was to merchandise atmosphere by generating it themselves. Since it seemed that so many people wanted to gawk at bohemians, why wait for them to show up if you could entice them with free dinners? Allegedly some restaurants did just that. 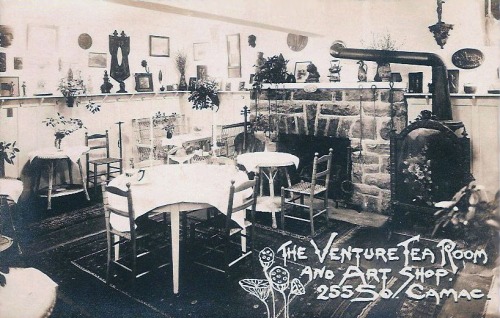 After World War I, following the reign of bohemian restaurants, came a new type of atmospheric eating place, the tea room of the 1920s. The tea room’s special atmosphere was  quaint and homey with artistic touches. In 1922 the Journal of Home Economics pronounced that “The very name of Tea Room has grown to mean a place with ‘atmosphere’ and with furnishings that are unique.” Ranging from the fashionable to the playful, tea rooms proved that women – their primary patrons – were in love with atmosphere. 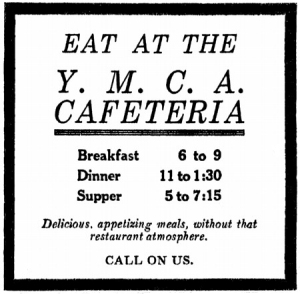 Bucking the trend toward atmospheric decor were a handful of holdouts. Anything like a “restaurant atmosphere” was anathema to a Y.M.C.A. cafeteria in Flint Michigan (1918). The Old Colony Coffee House in Richmond VA renounced “ordinary restaurant atmosphere” in 1924 and vowed it would have instead “simplicity in decorations” and “plainness in food.” Patrons of traditionally masculine restaurants feared that when Chicago’s J. R. Thompson’s tore out its white tiles for a more feminine look it had destroyed its no-nonsense atmosphere and gone “girly girly.” Likewise, design critic Lewis Mumford shuddered when the Childs’ chain replaced the “antiseptic elegance” of its “hospital ward atmosphere” for “fake fifteenth century English,” betraying the honest utilitarianism of the Machine Age. No doubt Mumford chuckled when Alice Foote MacDougall, queen of scenographic Spanish villas and French chateaux in NYC, went bankrupt in 1932. [see The Cortile below] 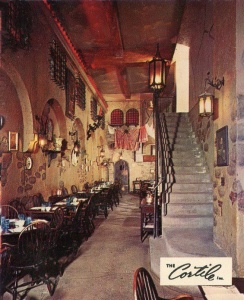 In the 1950s there was still a tendency in the restaurant industry to see women as the constituency for atmosphere while men supposedly judged a restaurant first by its food quality. But by the 1960s this was no longer true, as indisputably demonstrated by the success of Polynesian restaurants. An executive of the National Restaurant Association (NRA) said that Americans’ demand for atmosphere had raised the cost of opening a restaurant to $4,000 a seat in 1962.

One of the early chains built around atmospheric theme restaurants was David Tallichet’s Specialty Restaurant Corporation in California. In 1965 the firm opened Gate of Spain, capturing the “atmosphere of old Castile” atop a tall building in Santa Monica. Restaurant industry consultant George Wenzel recommended the following year that restaurateurs “give your guests something to do or something to see, or something to make conversations about.” He suggested creating a Gay Nineties or a river boat atmosphere.

In the 1970s theme restaurants came into their own, classified by the NRA as one of three of the basic types of restaurant in 1976, and the one that drew the most affluent guests.