Who was the mystery diner?

I am now the happy owner of Rian James’ Dining in New York published in 1930. When I opened it, I discovered a nice surprise: someone had penciled notes next to many of the restaurants described in the book.

This is a big deal to a restaurant historian because it is so hard to find out what consumers thought about restaurants in the past. Today it is easy, but in 1930, for instance, few people recorded their restaurant experiences and opinions in writing, possibly because it seemed trivial.

As I looked at the comments I wondered who wrote them. Was it the person whose name is inside the cover? And just what is that name? M. Z. Mells? Or, were the notes made by someone other than the book’s owner?

I puzzled over whether the writer was a man or a woman. There seems to be conflicting “evidence.” I find the handwriting ambiguous. As for content, on the one hand MZM used words such as “delightful” and “yummy,” went to lunch with Mother, Aunt Frances, and Mother’s friend Mrs. Claggett, and enjoyed the Gypsy Tea Shop (“Went here often with Mother – lots of fun”), all suggesting that MZM was female. But, then again, MZM loved the thick lamb chops at Keen’s Chop House, appreciated the Maitre d’ at the Roosevelt Grill, and often went to ice hockey games with Uncle Frank after dining at the Hotel Astor, hinting at maledom. 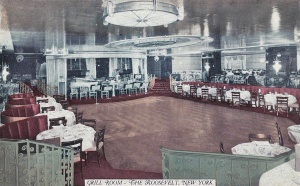 The surname Mells is uncommon. I found no M. Z. Mells, but did find a few women named Mells in NYC whose first names began with M. The strongest candidate was Mildred Mells. Born in New York City around 1910, in 1930 she worked as a model for a dress manufacturer and lived with her widowed mother and an older sister who was a supervisor for the telephone company. Her age meshed with the book’s publication and with the comment next to Enrico and Paglieri’s: “went there from childhood till 1945.” 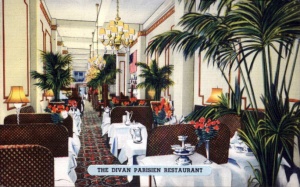 MZM added glowing comments, not only about the Roosevelt Grill (above), but also Keen’s (“Loved this place!”), The Lafayette and The Brevoort (both “old N.Y.C. landmarks”), Cavanagh’s (“A favorite place!”), Divan Parisien (“So good!”), and Charles French restaurant (“Excellent food and service”). In MZM’s minus column were The Wivel (“I liked other Swedish restaurants better.”), Luchow’s (“This was a very famous place but I didn’t care much for it or its food.”), and the Brass Rail, which merited the only comment written in the present tense (“don’t like this place”).

The writer couldn’t remember if s/he ever went to the Village Barn or Billy the Oysterman. S/he had eaten at Sardi’s, Zucca’s, Barney Gallant’s, The Commodore Grill, and Feltman’s on Coney Island but had no comments on them. And MZM regretted never making it to The Marguery or The Claremont Inn on Riverside Drive and 126th Street (“Went by this place hundreds of times but never got there. It looked so inviting.”)

I wonder why MZM passed by the Claremont Inn so often. Is that a clue? Now you know almost as much as I do. Any ideas about this little mystery?

5 responses to “Who was the mystery diner?”