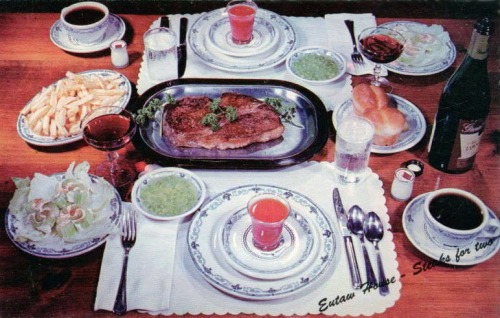 Recently I acquired a 1947 menu from the Algonquin Hotel of “round table” literary fame. I noticed that one of the appetizers was tomato juice and I thought to myself how commonplace a selection that once was and how rarely it is seen today.

No doubt there are restaurants that still have it on the menu – nothing really ever goes away totally. It reminds me strongly of an old standby restaurant in Massachusetts that closed about ten years ago. I was fascinated by the quaint metal contraptions on each table holding little pots of appetizers such as cottage cheese, olives, and pickles. There must have been tomato juice on the menu, too, despite it being decidedly out of style by then.

I was so convinced that tomato juice was hopelessly unimaginative that I was taken by surprise when I did a little research and discovered that it was considered a fashionable snob drink in the 1920s and 1930s. It came into vogue in the 1920s along with other good-for-you foods such as Melba toast, cottage cheese, pineapple, and sauerkraut juice. Women’s magazines touted it as smart, healthful, and perfect for anyone wanting to lose pounds just like a Hollywood movie star.

It is said that a chef at the French Lick resort hotel in Indiana introduced tomato juice to  American diners in 1917. It MIGHT be true that he was first to serve it in a public dining room – it does not seem to appear on American menus prior to World War I. However tomato juice was well known and available in cans in the 19th century so he clearly did not invent it (as is often reported).

A tomato juice cocktail could be made by the addition of tobasco sauce, paprika, sauerkraut juice, clam juice, etc. Mix well, shake until foamy, and pour over crushed ice. Restaurants tried all sorts of combinations. The Wrigley Building Restaurant in Chicago came up with clabbered tomato juice which was tomato juice mixed with a goodly amount of cottage cheese. Denver’s Blue Parrot Inn blended orange and tomato juices, while The Colony in New York mixed clam and tomato. 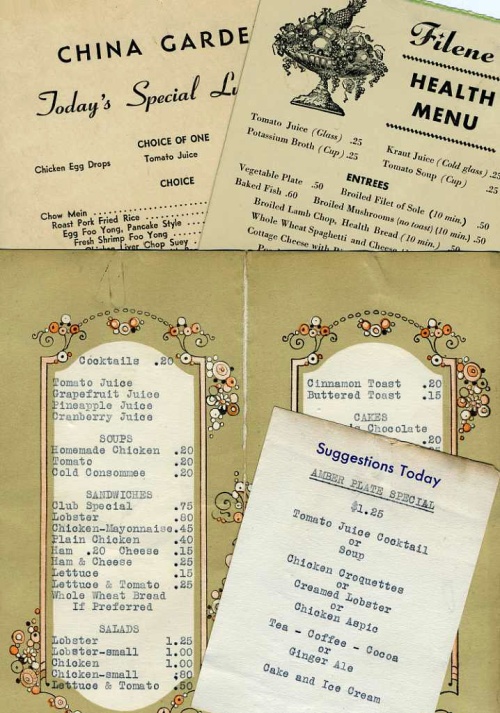 Although tomato juice could be found on menus of all kinds of eating places, even Chinese-American restaurants, it tended to be an appetizer favored by those who eat luncheon, not lunch. It was especially popular in restaurants that appealed to women then such as tea rooms, quaint inns, and department store restaurants. [illustration shows portions of menus from China Garden, Filene’s department store, and Willow Tea Cottage]

Arriving on the scene as it did during Prohibition, tomato juice clearly served as a non-alcoholic cocktail. Non-drinkers appreciated it, as did serious imbibers who had overdone things at their neighborhood speakeasy. It was a well known morning-after tonic continuing into the 1950s (and perhaps the present). In 1939 a restaurant in Shawnee OK allegedly served a “hangover breakfast” of tomato juice with hot sauce, soft-boiled egg, whole wheat toast, coffee, and two aspirins.

Tomato juice was so popular by the mid-1930s, both in homes and restaurants, that government scientists were said to be working on disease-resistant tomato varieties that would yield more juice. But by the 1980s it was considered an appetizer totally lacking in sex appeal, analogous to vanilla ice cream as a dessert. But, who knows? It could make a comeback. Tomato and kale juice cocktails?