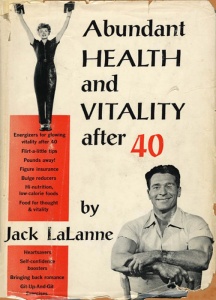 I published a recipe for The Aware Inn’s famed sandwich “The Swinger” some time back. But now I have a new improved version, thanks to Isis Aquarian, one of the members of Jim Baker’s commune when he was a spiritual leader named Father Yod. She was one of his 14 wives, as well as the commune’s historian and archivist. (A 2012 documentary film and book about the Source family commune is available.)

This recipe, which is superior to the one I found earlier, was published in the late fitness teacher Jack LaLanne’s 1962 book Abundant Health and Vitality after 40. Isis was hunting for an authentic recipe for the sandwich and was steered in the right direction by Jack’s son Dan (shown below in a recent photo with Isis). I can see that the proportions make more sense and that the eggs, missing previously, would be needed to hold it all together. 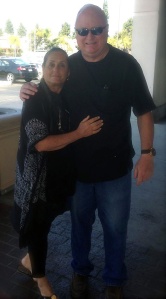 According to Isis, Jack LaLanne was not much of a restaurant goer until Jim Baker and his wife opened up The Aware Inn. He became a frequent visitor, along with many other health-conscious Hollywood celebrities such as Ed “Kookie” Byrnes of the TV show Seventy-Seven Sunset Strip.

Jack and Jim had known each other even before Jim moved to California in 1951 and joined the Nature Boys, a group of young men including LaLanne who lived in Topanga Canyon where they slept outdoors, got good tans, and ate an organic diet.

Needless to say, to follow Jim’s recipe correctly the beef used in The Swinger should be from naturally raised cattle and free of hormones and other injected chemicals.

Jack says in his book to mix and “caress” all the ingredients into large patties. Cook on a grill or broil. Do not use charcoal. He also advises, “Best served rare.”

4 responses to “The Swinger”