I came across this restaurant while looking through lists of winners of Holiday Magazine awards. I was intrigued to learn that Shambarger’s, in the small town of Redkey, Indiana, was one of only five restaurants in that state to win such an award in 1972.

As I learned more about Shambarger’s I had mixed reactions: fascination at its creator’s unstoppable spirit, surprise that it had won prestigious awards, and gratitude that I had never been compelled to sit through a 5- to 6-hour dinner and vaudeville show there.

For Shambarger’s fell into a category I call the fun house restaurant, once occupied by hotspots of enforced jollity such as Greenwich Village’s Village Grove Nut Club or the Beacon Supper Club in Denver whose owners put on funny hats to make people laugh [pictured]. La Nicoise in Washington, D.C. had waiters on roller skates.

Shambarger’s, adjacent to a railroad track, resembled an abandoned building on the outside, a junk shop on the inside [see painting below by Clyde Thornburg, 1971]. Its proprietor John Shambarger “performed” most of the seven-course dinner preparation in front of 50 or so guests who made reservations many months in advance, often traveled some distance, and paid about $100 a person in today’s dollars. 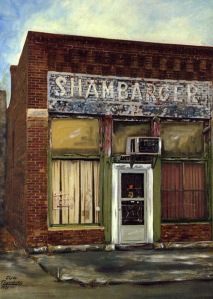 Making ten or more costume changes an evening, as a pirate, Tiny Tim, a Hawaiian dancer, etc., John chopped and mixed while singing, pattering, or loudly playing records keyed to each dish. Sometimes he told jokes, kissed women diners, or screamed ‘Aaayyyyy’ in people’s ears in concert with a Spike Jones record.

And all this without cocktails! No alcoholic drinks were served, except in later years when dinner began with punch bowl of “Bloody Redkey” made of tomato juice spiked with a Budweiser six-pack. Burp.

Holiday magazine’s volunteer judges in the 1960s and 1970s had a weakness for French cuisine. Which was what Shambarger’s provided, sort of. The menu was actually as jumbled as the decor of old clocks, menus, mirrors, lamps, and a moose head wearing a hat. It always included a main dish of Imperial Prime Ribs of Beef Flambee (in rum) and a dessert of sky-high strawberry pie (see above), but the first five courses varied. In one 1968 account they included – in a sequence that is perplexing – chicken soup, fresh fruit cup, corn fritters rolled in powdered sugar, shrimp, and guacamole with John’s special dressing.

Recipes for Shambarger’s guacamole and “Antique Salad Dressing” are furnished in the Holiday Magazine Award Cookbook (1976). I like guacamole and do not think it needs a dressing, especially not one made of cottonseed oil, vinegar, chopped onions, loads of sugar, catsup, concentrated lemon juice, and apple butter.

According to newspaper accounts, Redkey’s townspeople rarely ate at Shambarger’s, but they were always intrigued by the influx of well-dressed visitors from afar. In the words of Jayne Miller, who grew up in the area and now heads up Historic Redkey, Inc. (and provided information and images for this story), the locals knew that “magic” took place inside Shambarger’s humble structure.

The restaurant had its fans and its detractors, but enough of the former to keep Shambarger’s in business under John’s management from the 1960s through the early 1980s.