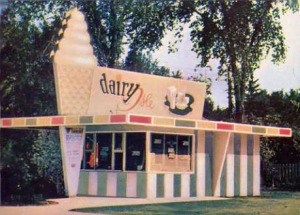 For ages ice cream has been primarily a commercial product. As was largely true of soda and beer, it was usually consumed outside the home until after World War II. Only then did supermarkets and homes acquire extensive freezer capacity. In 1925, according to Jakle and Sculle’s Fast Food, 19% of all ice cream was sold in grocery stores, the bulk of it being marketed through confectioners, drug store soda fountains, wayside stands, restaurants, and lunch counters.

Those who could afford it in the late 18th century often obtained ice cream from confectioners and caterers of European origin who made it each day in summer and served it in outdoor gardens or delivered it to homes for immediate consumption.

Late 18th- and early 19th-century residents of Philadelphia and New York City enjoyed eating ice cream in private parks such as NYC’s Vauxhall, Washington, and Columbian gardens which opened yearly on June 1. An elderly writer recalled in the 1860s that in the 1790s at Contoit’s on Broadway in NYC, “Little alcoves, well shaded, on each side of the gravelled walk, had each its table, where friends or lovers, in undisturbed quiet, could enjoy their cream and cake.”

Ice cream saloons (the term merely indicating a spacious room) and parlors, as they were called later in the 19th century, were described as gaudy mirrored palaces, lit brightly by gaslight. In 1869 M. F. Brigham & Son opened a Ladies’ and Gentlemen’s Coffee, Lunch and Ice Cream Saloon on Washington Street in Boston, in connection with a confectionery at which they sold candy, pastry, ice cream, frozen puddings, sherbets, jelly whips, charlotte Russe, Roman punch, and other confections. 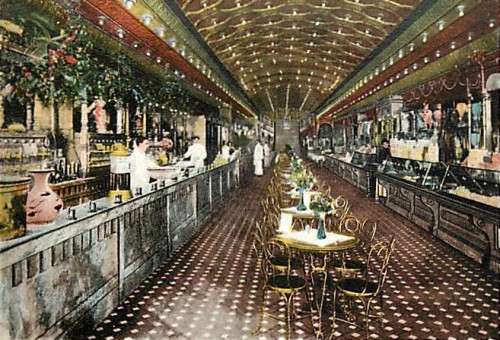 In Chicago, a number of these “ladies’ cafes,” as they were usually known, sprang up on State Street at the time of the 1893 World’s Fair, among them Gunther’s [pictured] and Plow’s. They featured special attractions – positively non-temperance drinks such as Yum Yum and a special version of Roman punch, the former 13% and the latter 20% alcohol!

It is strange, and a little jarring, to see so many advertisements of 19th-century eating places  specializing in ice cream AND oysters – until you realize the two were not usually consumed together. Featuring both as specialties makes perfect sense, though, since for decades oysters were not eaten during the summer months and ice cream was eaten only then.

Frequently, places that started out with just ice cream and simple refreshments eventually branched into restaurants selling lunches and other meals. When Schrafft’s established its first NYC store at Broadway and 36th Street in 1898, for instance, it served nothing beyond candy and ice cream.

With the increase in automobile ownership in the 1920s, and into the 1930s and 1940s, chains of roadside ice cream stands and eateries featuring ice cream began to form, among them Dutchland Farms, Howard Johnson’s, Prince Castle, Henry’s, and Friendly’s. “Soft serve” – a product whose name reflects that it does not meet the official definition of ice cream – caught on in the 1940s, a decade which commenced with the first Dairy Queen, located in Joliet IL. 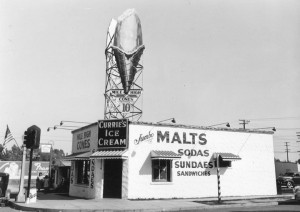 In Southern California, people still fondly remember the Currie’s chain and its “mile-high cone” whose replica was often displayed billboard-style on roofs. The chain was started in 1927 by three brothers named Kuhns. After WWII they sold it to the Good Humor company who later sold it to Lipton in the 1960s. In 1964 the chain opened its 87th store, in North Hollywood. Although Currie’s anticipated launching units in every community in Southern California, only three outlets were listed in the 1967 Los Angeles phone book and the chain had disappeared by the 1980s.