Famous in its day: Dutchland Farms

Unlike Howard Johnson’s, the Dutchland Farms chain grew out of a real dairy farm, established in 1897 by shoe manufacturer Fred F. Field. Years before the first Dutchland Farm dairy store – not yet a restaurant – opened in 1928, the dairy farm of the same name in Brockton MA had become nationally famous for its prize-winning herd of Holsteins. The ice cream produced by the farm in “28 flavors,” sometimes 30, was advertised as the only Grade A ice cream made in Massachusetts. (Most ice cream then was made from Grade B milk which has a higher bacterial count; now Grade B milk is mostly used for making cheese.)

By 1933 the newly incorporated company had 50 roadside stores that sold milk, butter, and eggs, and also served toasted sandwiches, frankfurters, and fountain treats, as well as “Chinese Chop Suey” supplied by Hung’s Food Products Co. of Boston. Soon the menu expanded to include complete dinners. Menus displayed Dutchland Farms “registered” colors, orange, blue, and white, which also formed the color scheme for buildings. The canvas awnings on the white building depicted on the South Easton MA postcard below would have been in eye-catching orange and blue stripes. 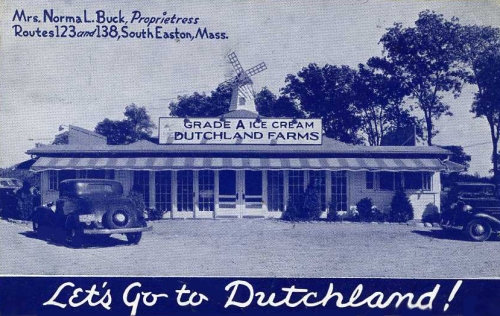 Fifty was probably the greatest number of Dutchland Farms units in operation at any given time. In addition to eastern Massachusetts where most units were located, the company did business in  New Hampshire, Rhode Island, Connecticut, and New Jersey. Some restaurants were operated by the company itself but most were franchised, as was true of  Howard Johnson’s. Women formed 10 to 15% of Dutchland Farms proprietors, a large percentage for a restaurant chain.

In addition to colorful awnings, Dutchland Farms buildings had two outstanding visual characteristics: orange roofs and decorative windmills which sat atop the roof or formed part of the building front. The roadside restaurants were situated on busy thoroughfares and both features were intended to attract motorists’ attention. Additional evidence of positioning for mobile customers were Dutchland Farms’ ample parking lots.

Still other Dutchland Farms restaurants became independents. A proprietor near Newport RI rechristened his The Mile Post, while a Dedham MA Dutchland adopted the name of its proprietor, Mary Hartigan. The same fate would one day befall Howard Johnson’s. Louise Prout turned her Cambridge HoJos into The Clipper Ship, disguising the cupola, sheathing the front with dark paneling, and decorating the entry with wrought iron.

16 responses to “Famous in its day: Dutchland Farms”