Over the weekend I went to an antiques show in Fitzwilliam NH and bought some vintage menus. The seller had a cache of them from a printer in Manchester NH, all from 1956. 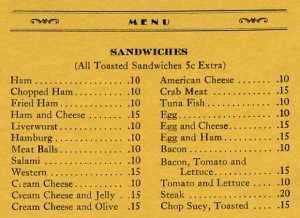 An unusual selection on one of the menus caught my eye, a Toasted Chop Suey sandwich. Odder still, the sandwich appeared on a menu from Angelo’s Spaghetti House.

It would seem slightly less strange to me if it had been a Chinese restaurant, such as the Chinese and American Red Rose Restaurant in New London CT, where around 1960 diners could order a Chow Mein sandwich.

But, upon reflection I have to ask myself why either of these sandwiches should seem odd. I used to enjoy a specialty of St. Louis Chinese restaurants called the St. Paul sandwich which consisted of something resembling Egg Foo Young served between two slices of spongy white sandwich bread slathered with mayonnaise. It was delicious.

I don’t mean to single out New England as the home of strange restaurant dishes, but it so happens that I’ve personally encountered two of the weirdest food combinations of my dining-out life in this part of the world.

One was in a New England inn with a quaint name and an old coach on the front lawn. It is against my better judgment to go to such places but a visitor from afar expressed interest in it. I have no idea what I ordered but let’s assume it was chicken or beef. Along with it, in a small saucer, came two whole boiled potatoes smothered in tomato sauce straight out of the can. I have to think that the cook was suddenly taken ill and the dishwasher, the only other person in the kitchen, had to take over.

At a restaurant in Springfield MA I experienced another culinary shock. I had taken my visiting parents there on the way to the train station because they liked Italian restaurants and it was handy. I have forgotten what we ate, but at tables all around us people joyfully celebrated carbo-loading with side dishes heaped with spaghetti AND french fries — in addition to their main dishes. I like spaghetti. I like french fries. But together?

Changing the focus from New England to California, “Chili Size” might at first seem like an odd dish but upon closer inspection it is not so much the components that are peculiar – a hamburger patty covered with chili with beans, sometimes with cheese melted on top of it all – as it is the name.

On the other hand there may be people who don’t think any of these things are odd.