Taste of a decade: 1870s restaurants 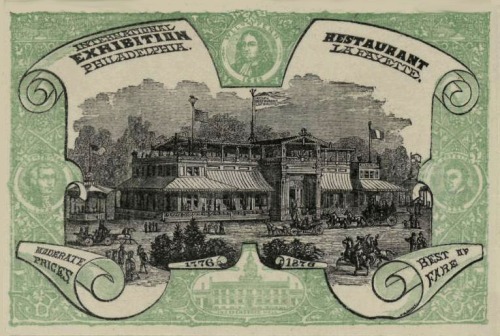 Marked by a deep Depression with high rates of unemployment and business failure, the destruction of Chicago by fire, and the world’s most popular international fair to date, the 1870s are a tumultuous time for the burgeoning restaurant trade. On the one hand many restaurants fail, yet the field widens as new types and markets emerge. Despite a 14% unemployment rate, the appeal of dining out grows as many of the nearly 10 million visitors to Philadelphia’s Centennial Exposition experience restaurants for the first time. Some of the fair’s restaurants set up permanent businesses when it ends. 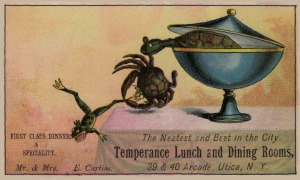 The temperance movement introduces innovation with cheap coffee houses that demonstrate how to serve the masses on a strict budget without profits from alcoholic drinks. Under financial pressure American-plan hotels, which formerly provided limitless amounts of food with the price of a room, shut down their dining rooms, expanding the number of customers for outside restaurants. Better restaurants open special rooms and sections for unescorted women in response to growing demand. A Civil Rights Act is passed in 1875 that outlaws discrimination in public accommodations but it is disregarded and has little impact.

Experiencing reduced incomes, middle-class people wish for inexpensive eating places that are clean and have decent food. The NY Times comments, “Gentlemen who a few months ago would spend a dollar or so for a lunch and bottle of ale, now would be satisfied with a piece of roast beef and a glass of lager or cup of coffee…”

The country is primarily rural. As the decade begins only two cities have more than 500,000 population. The big wave of immigration has not yet begun, and many restaurants are run by Irish, English, and German immigrants from earlier decades. Refrigerated railway cars make it easier than ever before to ship dressed meat, oysters, seafood, fruits, and vegetables to all parts of the country, bringing luxuries to the tables of restaurants in out of the way spots.

1871 Amidst the smoldering ruins of the Great Fire, inventive Chicagoans put their culinary operations on wheels and tour about the city supplying long lines of hungry patrons with fried fish, sausages, coffee, and pie. In a sense these are the first American “diners.” 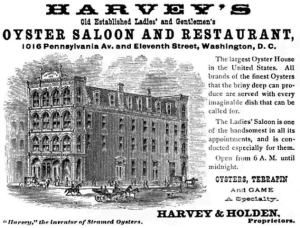 1873 Harvey & Holden in Washington D.C., which claims to be the largest oyster house in the nation, serves premium oysters from Maryland and Virginia every day from 6 a.m. until midnight. The restaurant is moderately priced, except for black patrons who allege they are charged extortionate prices.

1874 The enterprising Frederick Kurtz, operator of four “Old-Established and First-Class Restaurants” in lower Manhattan advises his customers that he has “reduced the Prices of his Bill of Fare to the most reasonable rates, To Suit the Times.”

1875 At Thompson’s in Chicago, about one third of the patrons are women. Unlike most restaurants, no liquor is served here.

1876 The Centennial Exposition in Philadelphia is well supplied with restaurants, among them a re-creation of the world-famous Trois Frères Provençeaux [Three Brothers from the Provinces] which closed in Paris four years earlier. One commentator prays it will influence America’s tough-steak-and-weak-coffee cookery.

1876 Edmund Hill of Hill’s Dining Rooms in Trenton NJ visits the Exposition for the seventh time and has dinner at Lauber’s German Restaurant with a refrigerator salesman. He writes in his diary, “There must have been a thousand persons there at the time I was eating.” 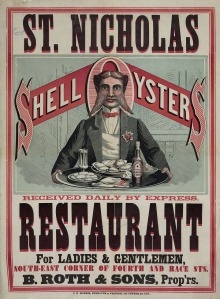 1877 After an editorial appears in the Boston Globe stating a need for decent, inexpensive restaurants, a reader writes in to complain about how “Dirt and democracy seem somehow inseparable” and the only clean restaurants are unaffordable ones such as Delmonico’s.

1878 At the Oyster Bay Restaurant on Alpine Street in Georgetown, Colorado, oysters are served “in all styles and at all hours.”

1879 Journalist and author Lafcadio Hearn starts a cheap restaurant in New Orleans called The Hard Times where all dishes cost 5 cents. He writes to a friend that he is “going to succeed sooner or later, even if he has to start an eating-house in Hell,” but rapidly goes out of business all the same.