In the 1890s it was considered daring to go to an Italian restaurant and eat spaghetti. The restaurants were not in affluent neighborhoods and some middle-class people worried (largely needlessly) about how clean they were. Non-drinkers didn’t approve of the “red ink” (wine) that came with the spaghetti. Some women felt it was not ladylike to eat spaghetti in public. Then there was the garlic, which was considered seriously foreign by many Americans. But others, especially offbeat types – artists, musicians, and free spirits known as “bohemians” — loved the whole experience: spaghetti, wine, garlic, low prices, and the friendly atmosphere found in most Italian places. The future of spaghetti belonged to them.

Italian pastas were not really new in this country. Thomas Jefferson brought several cases back from Paris in the 1780s and when he ran out he imported a piece of equipment for making macaroni (as all pastas were known then). Macaroni occasionally shows up on menus before the Civil War. In 1844 the Café Tortoni, a French restaurant in NYC, featured stewed beef with macaroni. Pastas were growing popular enough by 1888 to be manufactured in the United States, made of durum wheat grown in the Dakotas. 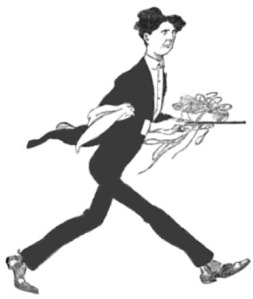 The bohemian fad for spaghetti grew stronger in the early 20th century, particularly in lower Manhattan and San Francisco. Diners flocked to Gonfarone’s in Greenwich Village. Despite its low prices, the restaurant made money because a 50-cent dinner with a complimentary glass of wine cost but pennies to put on the table – about 2 cents for the spaghetti and a few cents for a carafe of the red California claret bought by the barrel, 40 or 50 at a time.

In 1904 short story writer O. Henry swelled the fame of the spaghetti restaurant with “A Philistine in Bohemia.” The story involved a poor, unsophisticated daughter of a rooming house keeper who is taken out to a restaurant called Tonio’s by one of her mother’s boarders. When they arrive at the restaurant he disappears, later to emerge from the kitchen as the chef who is warmly greeted by the regular diners who regard him with awe.

Spaghetti sauces in the early Italian restaurants often were made of a brown sauce mixed with tomato sauce, the whole dish sprinkled with freshly grated Parmesan cheese. The brown sauce was made with thickened beef broth, sauteed mushrooms, and sometimes truffles and chicken livers.

By around 1910 spaghetti had spread to restaurants run by non-Italians. It might appear on menus as “Spaghetti Italienne” or as “authentic Italian” if garlic was used, perhaps a warning to avoiders. On the other hand, bland American-style spaghetti quickly became a regular in cheap cafés and on cafeteria steam tables. In “home-cooking” places, such as Foster’s on South Wabash in Chicago, it joined a melange of 25-cent dishes like ham with macaroni, creamed eggs on toast, corn fitters with maple syrup, clam chowder, and baked beans. 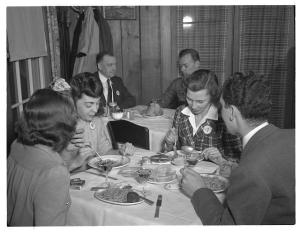 Spaghetti, Italian and non, continued as a staple restaurant dish during successive decades, in speakeasies of the 1920s, Depression dives and diners, and a variety of restaurants during the meatless months of World War II. Next came pre-cooked meatballs and prepared sauces in the 1960s and 1970s which meant even virtually kitchenless restaurants could serve spaghetti. Its cheapness and the fact that children like it also made spaghetti a favorite of family restaurants, and the basis of chains such as the Old Spaghetti Factory, the original of which was started in Portland OR by a Greek immigrant in 1969.