Taste of a decade: 1950s restaurants 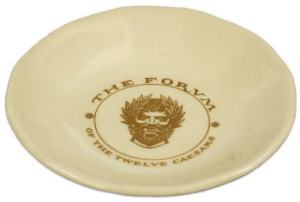 By the end of the decade almost 40% of Americans live in suburbs and 75% have televisions. Church-going enjoys a revival. “Under God” is added to the Pledge of Allegiance and “In God we trust” is stamped on coins. Even as social pressures push women toward homemaking, 40% work outside the home. Congress passes the Internal Security Act requiring communists to register with the Attorney General. In Brown vs. Board of Education the Supreme Court rules that “separate but equal” education must end. Casual dining prevails, both at home and in public, yet interest in new dining experiences, luxury, and exotic cuisines is apparent. The restaurant industry looks forward to a bright future.

1950 Trade magazine Restaurant Management warns restaurateurs to have nothing to do with subversive organizations on the Attorney General’s list, including the Abraham Lincoln Brigade, the Hawaii Civil Liberties Committee, and the Michigan School of Social Science. – The National Restaurant Association adopts the slogan “It’s fun to eat out” to boost the family trade which has fallen off because, the organization believes, people are home watching TV.

1952 A Chicago restaurant advertises its “atomic menu,” with items such as “Guided Mussels.” – Teens get behind the wheel and drive-ins flourish. In Stockton CA patrons can choose among Billy’s Drive-In, Dick’s Drive In, Don’s Drive-In, Travo-Burger Drive Inn, or the Snow White Drive Inn. – A prominent black Denver physician wins a suit against a drive-in restaurant in Fort Morgan CO after he and his wife are refused service.

1953 Dazzled and bewildered, vacationing Eleanor writes to Clare in Haverhill MA about the smorgasbord she enjoyed at Old Scandia in Miami: “Had dinner here today. Couldn’t tell you half of what I ate as the food is so different. What a life.”

1954 A wine expert advises restaurateurs that California wines, though inexpensive, are hard to merchandise because of their “strange un-American names” such as Cabernet Sauvignon, Pinot Noir, and Chardonnay. – Restaurant surveys in Chicago reveal that “some establishments use 25 per cent fewer man hours in the kitchen now than five years ago because of pre-fabricated meats, frozen foods, pre-pared potatoes, and commercial pies and cakes.”

1955 A pancake boom begins after the Aunt Jemima Pancake House opens in the new Disneyland in Anaheim CA. – Duncan Hines says that some of the best restaurant dishes he’s ever eaten are almond souffle at Voisin in NYC, cheesecake at Lindy’s, and apple pie at the Forum Cafeterias in Chicago.

1957 The Hot Shoppes company operates restaurants and cafeterias in 11 states and D.C. as well as serving meals on airlines, the NY Thruway, and in government dining facilities. It keeps a 3,000-acre sheep and cattle ranch in Virginia, as well as a commissary, butcher shop, bakery, and ice cream plant in D.C. – In NYC the Forum of the Twelve Caesars opens. Unfazed by its campy decor and toga-clad waiters, NYT reviewer Craig Claiborne hails its “lusty elegance,” “opulent” food, and “superb” service. 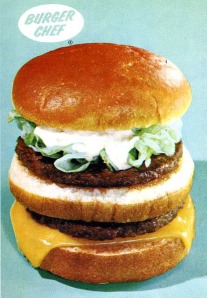 1958 When the IRS cracks down on expense accounts by requiring detailed proof of expenses, membership in The Diners’ Club rises sharply. In NYC, advertising executives make up the largest category of members, followed by people in the TV industry. – The Burger Chef chain gets its start.

1959 Along suburban roadways national hamburger chains offer stiff competition to drive-ins and downtown hamburger shops such as Little Tavern and White Tower. With more than 100 units across the US, Ray Kroc attributes McDonalds’ success to cheap mass-produced food and the elimination of carhops. – Citizens protest that the new coffeehouse phenomenon will attract beatniks. In D.C., Coffee ‘n’ Confusion, offering Irish stew, coffee, and chess, promises to price coffee high enough to keep out undesirables.