Anatomy of a restaurateur: Don Dickerman 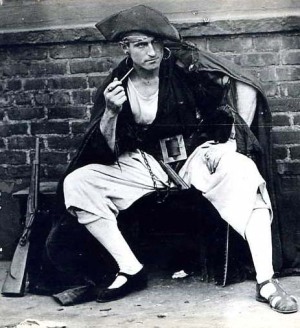 Don Dickerman was obsessed with pirates. He took every opportunity to portray himself as one, beginning with a high school pirate band. As an art student in the teens he dressed in pirate garb for Greenwich Village costume balls. Throughout his life he collected antique pirate maps, cutlasses, blunderbuses, and cannon. His Greenwich Village nightclub restaurant, The Pirates’ Den, where colorfully outfitted servers staged mock battles for guests, became nationally known and made him a minor celebrity.

It might seem that Don’s buccaneering interests were commercially motivated except that he often dressed as a pirate in private life, owned a Long Island house associated with pirate lore, formed a treasure-hunting club, and spent a small fortune collecting pirate relics. He was a staff artist on naturalist William Beebe’s West Indies expedition in 1925, and in 1940 had a small part in Errol Flynn’s pirate movie The Sea Hawk. 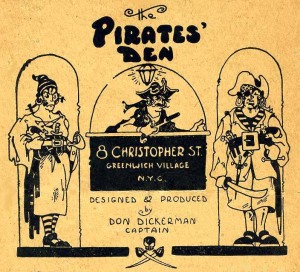 Over time he ran five clubs and restaurants in New York City. After failing to make a living as a toy designer and children’s book illustrator, he opened a tea room in the Village primarily as a place to display his hand-painted toys. It became popular, expanded, and around 1917 he transformed it into a make-believe pirates’ lair where guests entered through a dark, moldy basement. Its fame began to grow, particularly after 1921 when Douglas Fairbanks recreated its atmospheric interior for his movie The Nut. He also ran the Blue Horse (pictured), the Heigh-Ho (where Rudy Vallee got his start), Daffydill (financed by Vallee), and the County Fair.

On a Blue Horse menu of the 1920s Don’s mother is listed as manager. Among the dishes featured at this jazz club restaurant were Golden Buck, Chicken a la King, Tomato Wiggle, and Tomato Caprice. Drinks (non-alcoholic) included Pink Goat’s Delight and Blue Horse’s Neck. Ice cream specials also bore whimsical names such as Green Goose Island and Mr. Bogg’s Castle. At The Pirates’ Den a beefsteak dinner cost a hefty $1.25. Also on the menu were chicken salad, sandwiches, hot dogs, and an ice cream concoction called Bozo’s Delight. A critic in 1921 concluded that, based on the sky-high menu tariffs and the “punk food,” customers there really were at the mercy of genuine pirates.

As the Depression deepened business evaporated, leading Don to declare bankruptcy in 1932. A few years later he turned up in Miami, running a new Pirates’ Den, and next in Washington D.C. where he opened another Pirates’ Den on K Street in Georgetown in 1939. In 1940 he opened yet another Pirates’ Den, at 335 N. La Brea in Los Angeles, which was co-owned by Rudy Vallee, Bob Hope, and Bing Crosby among others. In the photograph, Don is shown at the Los Angeles Pirates’ Den with wife #5 (photo courtesy of Don’s granddaughter Kathleen P.).

24 responses to “Anatomy of a restaurateur: Don Dickerman”