Taste of a decade: 1860s restaurants

Half the population of the largest cities is foreign born. San Francisco continues to attract adventurers and French chefs. The Civil War brings wealth to Northern industrialists and speculators, encouraging high living. With German immigration going strong, beer gains in popularity as do “free” lunches. Saloons prosper and the anti-alcohol movement loses ground as the states where liquor is prohibited shrink from thirteen to six, then to one. Cities grow as young single men pour into urban areas. Restaurants spring up to feed them and cheap lunch rooms proliferate, offsetting the high prices prevalent during and after the war. By the end of the decade, one estimate puts the number of eating places in NYC at an astonishing 5,000 or 6,000.

1861 In what may be the first published use of the term lunch counter, the new proprietor of the Front-Street Coffee House in New York advertises his “Dining Saloon, Lunch Counter, Bar and Oyster Department.” – Boston, population about 178,000, lists 135 restaurants in its city directory.

1862 Madame Favier assures patrons of her Charleston SC restaurant that she will not substitute rye for genuine Rio coffee “in spite of the hard times and the blockade.” – War wealth in New York stimulates business at the new 14th Street Delmonico’s at Fifth Avenue, boosting the restaurant’s distinction. 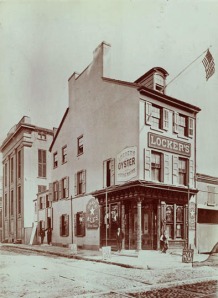 1863 War stirs up restaurants in Virginia. A Richmond newspaper observes, “Norfolk, like Richmond, is swarming with restaurants.” Among Richmond’s eating places are the Hygeia, the Friendship Restaurant, and the Café de Paris.

1864 To raise funds for Union soldiers, volunteers organize a fair in Brooklyn featuring a New England Kitchen. Crowds pack the 1770s “theme” restaurant where women in “quaint attire” serve pork & beans, pumpkin pie, and doughnuts to guests who eat with two-tined steel forks from the olden days. — In San Francisco, a French couple open a new restaurant and salon (see below — Is it merely linguistic confusion or are they offering wine with breakfast?).

1865 A journalist describes the comical, unfamiliar sight of men wolfing down grub at a NYC lunch counter while perched on high stools with their heads bent down “and their elbows in rapid motion.” “Viewed from the rear,” he writes, “one might suppose them to be weaving or fiddling.”

1867 Wealthy black Philadelphia restaurateur John W. Price, born a slave, throws a bash for Frederick Douglass. His restaurant at 4th and Chestnut is one of the city’s largest. – In Memphis, Monsieur John Gaston opens a “Ladies’ Restaurant” where, he promises, “the most delicate and sensitive will find nothing to offend their ear or observation.”

1868 Louis P. Ober establishes a Restaurant Parisienne on Winter Place in Boston. Like some other French restaurateurs, he is also a wine importer. – In Leavenworth KS, the Italian Giacomini brothers open the New Delmonico Restaurant. – In San Francisco, diners in French restaurants push back the dinner hour from the middle of the day to around 6:00 p.m.

1869 On the spur of the moment, President Ulysses S. Grant enters a fashionable Washington restaurant for breakfast wearing a stove-pipe hat. A cashier, failing to recognize him, refuses him a private dining room and explains later that Grant looked like “an old shoemaker with his Sunday clothes on.”

One response to “Taste of a decade: 1860s restaurants”