Lunching in the Bird Cage 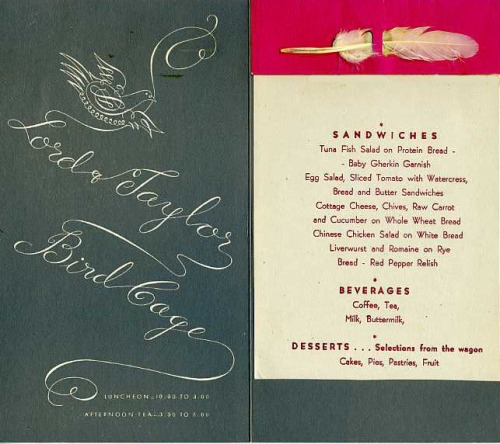 Lord & Taylor’s Bird Cage restaurant and tea room was opened in the late 1930s. It continued on the fifth floor of the Fifth Avenue New York City store until the 1980s when it was updated and renamed Café American Style. Accommodating only about one hundred persons, the Bird Cage was considerably smaller than the main restaurant in Altman’s which held over two hundred, as well as Abraham & Straus’s in Brooklyn which held over four hundred. Until the mid-1970s the Bird Cage was outfitted with armchairs with trays connected to them. In the early years each tray was supplied with a complimentary cigarette. Diners selected sandwiches, salads, and desserts from rolling carts modeled on Italian racing cars. As Lord & Taylor branches were opened after World War II in locations such as Westchester (shown here, 1948), Millburn NJ, Hartford CT, and Washington DC, they too were furnished with their own Bird Cages. 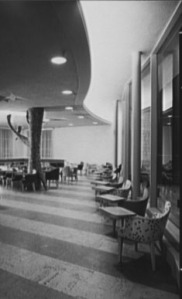 For many years the Bird Cage staff at the Fifth Avenue store provided refreshments to shoppers who arrived before the store opened each morning. Lord & Taylor president Dorothy Shaver initiated the custom and insisted that the coffee, juice (in summer), or bouillon (when temperatures were frigid) be served in china, not paper, cups. 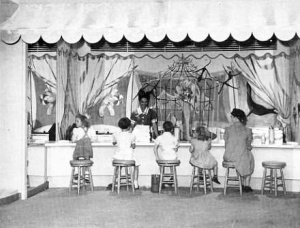 Other well-loved eateries in the Manhattan store were the men’s Soup Bar on the tenth floor and the children’s Milk Bar (shown, 1950). Scotch broth and deep-dish apple cobbler with rum sauce were specialties at the Soup Bar.

36 responses to “Lunching in the Bird Cage”