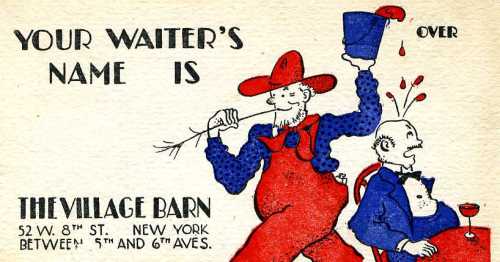 Until I found this card I was convinced that the custom of waiters disclosing their first name started in the 1970s. The Village Barn was a Greenwich Village restaurant and night club. I’d guess this card dates from the 1950s. Many people dislike having servers tell them their names because they feel it’s a smarmy way to wangle a bigger tip.

The first mention of tips (originally known as fees or douceurs) I’ve found was in 1840: “The renumeration [sic] of the eating-house waiter, though based on the voluntary system, is yet a fixed one, like a physician’s fee. His honorarium is the moderate sum of one penny.” Keep in mind that an average dinner at this time usually cost 25 to 50 cents.

Today we pretty much accept tipping as an inevitable part of eating out but that wasn’t always so. One hundred years ago there were many people who wanted to eradicate tipping, which had only become commonplace around 1890. They were convinced the custom was a foreign one that didn’t belong in a democratic society. They felt it created an unhealthy master-servant relationship in which the server either groveled or tried to manipulate the customer. One of the things critics hated most were snooty waiters in upscale restaurants who made guests anxious by subtly hinting they were low-class pretenders who didn’t belong in a fine restaurant. This worked like a charm with insecure folks who compensated by leaving a generous tip to prove they were legit.

More recently, other waiters revealed that the snooty method produces better tips than the friendly approach. Maybe servers should say, “Hello, my name is … none of your business.”

2 responses to “Tipping in restaurants”