Clearly restaurant uniforms and costumes serve a variety of practical purposes, especially if they are comfortable, easy to move in, and well supplied with pockets. They mark their wearers as restaurant staff rather than patrons. Some go a step further by carrying out a restaurant’s decor or theme. Still others promise to bring male customers in the door.

Even though they share common characteristics, three types can be distinguished as described above: the functional, the decorative, and the alluring. Each has its own separate history.

Surprisingly, the oldest are alluring costumes that bring customers in the door.

Most restaurant and hotel dining room servers in the 19th century were male. Female servers usually worked in the lower types of eating and drinking places. They were often viewed as women of loose morals if not downright criminals; enticing male patrons as well as taking abuse from them were part of the job.

As early as the 1860s, music halls, also known as concert saloons, began heavily advertising the presence of “pretty waiter girls” whose job was to deliver beer and cocktails to male patrons. Their outfits were referred to as “fantastic,” “with short petticoats,” “microscopic,” or resembling “extremely reduced ballet dress.”

Reformers eventually succeeded in eliminating pretty waiter girls by banning the sale of alcohol in music halls. But the realization that female servers dressed in scanty costumes could attract customers did not disappear. In the mid-1890s, some cafes introduced women dressed in knee-length bloomers that showed off their legs. Although bloomers also had some practical advantages, that was not what attracted crowds of gawking male customers.

Dressing servers as pretty waiter girls continued in the 20th century and right into the present. In the 1930s, drive-ins dressed carhops in drum majorette costumes with shorts and bare midriffs; Playboy bunnies came along in the 1960s, as did topless waitresses and bordello-themed restaurants with servers in red and black corsets; in the 1980s came “breastaurant” chains such as Hooters, with Twin Peaks and Tilted Kilts arriving in the 2000s, all with servers wearing regulation big smiles and low cut tops and short shorts or micro-kilts.

The ability to attract large tips clearly plays a significant role in women’s willingness to perform an almost vaudevillian sexy server role. It was said that the 1860s pretty waiter girls, who enticed patrons to drink heavily, received a portion of the check rather than regular wages. Some 1930s drive-ins paid no wages either, figuring the carhops received generous tips.

About the same time as pretty waiter girls arrived in music halls, “good girls” wearing modest decorative costumes took up their serving trays at fairs to raise money for civil war soldiers. At New York’s fair, for instance, they dressed as Normandy peasants with picturesque caps. It soon became fashionable to dress female servers in costumes such as Martha Washington at a “Boston tea party” or Swiss peasants at an 1876 Centennial Exhibition restaurant named The Dairy.

The popularity of decorative novelty costumes carried over to commercial restaurants such as the tea rooms of the early 20th century where Asian and Colonial motifs were popular. Next it spread to theme restaurants of all kinds and servers could be found wearing togas, grass skirts, kilts, Bavarian dirndls, sarongs, etc., some of these — such as steakhouse wench costumes — revealing as well as decorative.

As far as I can tell, Asian-American women were never hired as servers unless they agreed to work in their “native costumes.” Black women rarely worked as servers in white restaurants, but when they did they often wore Mammy costumes. I can’t decide if it was a step forward or backward when Alice Foote MacDougall hired light-skinned Black women to dress like Italian peasants at Firenze in NYC in the 1920s.

As is true of alluring waitress costumes, decorative costumes never fell completely out of favor and continue in use today.

Fred Harvey, who ran lunch rooms and restaurants for the Santa Fe railroad, introduced functional, standardized uniforms as early as 1883 and a Denver restaurant claimed in 1895 that its unionized “lady waiters” were “dressed in complete uniform, something never before introduced in this country.” But in most eating places women simply wore street clothes such as shirtwaists and long skirts, possibly with a long apron or pinafore, when they served meals. This began to change in the early 20th century, primarily in the better-capitalized, modern restaurant chains.

The spread of standardized uniforms in the teens and twenties represented a significant change. Although the status of waitresses did not rise dramatically, wearing a uniform did add a professional dimension to the job, putting wearers on a par approaching nurses, police, soldiers, and others with authority. A newspaper columnist in 1928 named Mary Marshall observed that wearing uniforms had recently become “a privilege rather than a disgrace” as they were adopted by dentists and doctors, telephone operators, bank tellers, hairdressers, department store saleswomen, and waitresses.

Part of the explanation for standardized waitress uniforms arose from concerns with restaurant cleanliness in the years before WWI. But their adoption was also a sign of a growing restaurant industry looking for legitimacy. The development of functional uniforms occurred as restaurants were run more systematically. Specialized manufacturers and suppliers emerged to furnish restaurants — separate from hotels — with kitchen equipment, furniture, china, linens, uniforms, and food products.

Another significant change in how female servers were dressed began to take place in the 1970s, influenced by the women’s movement. A growing number of Americans expressed dislike of revealing costumes. A restaurant critic focusing on Monterey Jack’s at Rancho Bernardo in California in 1978, for instance, cited the restaurant’s corny decor, “near total disregard for food,” and “exaggerated and tasteless attire” that debased the waitresses.

The tide was definitely turning in the 1980s. In a 1993 article in Gender and Society, author Elaine J. Hall’s research showed that the more “prestigious and trendy” a restaurant was, the more likely all its serving staff, both male and female, would be referred to as waiters and would wear “generic male uniforms.” A unisex uniform is usually composed of dark pants and shirt worn with a vest or a long bistro-type apron. Women servers in restaurants that have adopted unisex uniforms, she noted, see them as “an important aspect of gender equality.”

Anyone who knows American culture realizes immediately that the term “adult restaurant” would not even remotely imply an eating place that caters to mature or developed culinary tastes. Instead it would mean one deemed inappropriate for children because of some kind of sexually tinged goings on.

Historically the attractions in adult restaurants have not been what’s on the plate but are part of the female servers’ anatomy.

An unfamiliar restaurant concept to me is the “adult fast food restaurant.” This is how a Florida drive-in owner referred to his business in 1976. It didn’t serve adult fast food – what would that be? Crêpes? It served hot dogs, hamburgers, beer, and, oddly, wine. The manager called it “our answer to MacDonald’s,” reflecting the fierce competition drive-ins faced from big chains in the 1970s.

The “adult” aspect: servers at the “Jugs ‘n’ Suds” drive-in were costumed only in hot pants and tassles.

However, Jugs ‘n’ Suds waitresses got very little chance to “wear” their intended costume. The drive-in met with vehement disapproval from citizens and officials of New Port Richey who insisted that the waitresses cover up. One of the restaurant’s promoters admitted that business fell off once apron-like halter tops were adopted, saying “People aren’t as interested in seeing a topless waitress with fringe on.” [pictured] In very short order the drive-in closed. A second one – without carhops — then opened in an old A&W. I don’t think it lasted long. A fantasized  nationwide chain never materialized.

Jugs ‘n’ Suds was unusual in that it was a drive-in. Most topless restaurants have been positioned at the “nightclub” end of the restaurant spectrum. Typically they’ve been dark, bar-like spaces where business men congregate at noon and after work.

California was the birthplace of the topless restaurant with the pioneers opening in 1965 not long after the creation of Rudi Gernrich’s topless bathing suit. Many offered a business man’s lunch special accompanied by models strolling from table to table. In California, at Long Beach’s Kozy Kitten, kittens ambled while patrons downed 98c luncheons of Turkey, Ham, or Beef served with Potato Salad and Beans. (I didn’t say topless restaurants were glamorous.)

The topless restaurant fad, which combined gawking, drinking, AND eating, died out, but using women’s anatomy to attract restaurant patrons did not. Maybe it’s eternal. Even as the last Playboy bunny club closed in the 1988, a new crop of “breastaurants” (as they are mockingly known by critics) appeared, most of them flaunting scantily dressed servers. Following the success of Hooters, a slew of knock-offs opened in Florida, among them the so preciously named Melons, Knockers, and Mugs & Jugs. 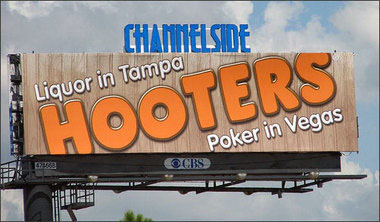 Controversy is also eternal. Hooters’ aggressively suggestive advertising campaign has offended many and the chain was forced to remove billboards that hinted servers were prostitutes, an idea that, depressingly, has plagued female servers since the 19th century.

Legal challenges to topless restaurants and breastaurants have mostly not held up. But communities protest them anyway, occasionally successfully. Recently the Quincy MA Licensing Board denied permission to a unit of the Tilted Kilt chain because it was too close to a church that objected.