With haute cuisine for all: Longchamps

Staked by his brother-in-law, gambler Arnold Rothstein, Henry Lustig expanded from the wholesale produce business into restaurants in 1919. His first location, at 78th and Madison Avenue, was a property that belonged to Arnold. By 1924 he had two more restaurants, one conveniently near Saks Fifth Avenue. An advertisement informed “Madame or Mademoiselle” that at Longchamps they would find light French dishes as well as “soothing quiet, faultless service and a typically ‘Continental’ cuisine” that was above average “yet … not expensive.” While not exactly cheap, Longchamps was considered easily affordable by the middle-class.

The chain continued to grow rapidly after the repeal of Prohibition when it hired top modernist decorators and architects to give it ultra-sophisticated chic. With the assistance of German-born artist and designer Winold Reiss and architects Louis Allen Abramson and Ely Jacques Kahn, New York City gained some of its most glamorous restaurant interiors of the period. Reiss showed considerable talent in disguising irregular spaces with mirrors and murals, multiple levels, dramatic lighting, and flashy staircases that lured people cheerfully downward to dine below ground (see his interior sketch and menu cover below). From 1935 to 1940 Longchamps opened seven new restaurants, including two on Broadway, one at Lexington and 42nd Street, and one in the Empire State Building. 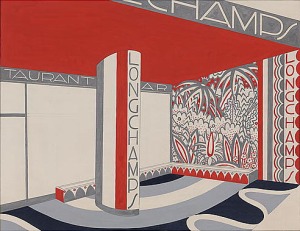 Cocktail bars were no small part of the slick 1930s Longchamps formula. The chain’s ninth unit at Madison and 59th Street, a site vacated by Reuben’s, had a long oval bar stationed above floor level in the middle of the dining room. With 50 bartenders staffing the bar, the restaurant itself seated 950 diners. When it opened in 1935 a Longchamps advertisement immodestly called it “The Outstanding Restaurant Creation of the Century.” Architectural critic Lewis Mumford found its red, black, gold, and yellow color scheme — carried out even on chair backs and table tops — overdone, but he sensed that his was a minority opinion and he was almost certainly right. Among others, it soon became a meeting place for James Beard and his old friends from Oregon.

During the war Longchamps’ did a booming business. Lustig, it turned out, was siphoning off cash as fast as he could and keeping two sets of books, one for him and one for the IRS. Keep in mind that he owned racehorses and had named his restaurants after a famous Paris racetrack. The game was up in 1946 when he was handed a bill for delinquent taxes and fines of more than $10M and sentenced to four years in federal prison. Nine restaurants, along with a good stock of wine (the Times Square unit alone was said to have 120,000 bottles in the cellar), miscellaneous pieces of Manhattan real estate, and the chain’s bakery, catering business, ice cream plant, candy factory, and commissary, then passed into the hands of a syndicate which owned the Exchange Buffet.

In 1952 a Longchamps was opened in Washington, D.C., becoming one of the few downtown restaurants in that city that served Afro-American patrons. About this time another Longchamps opened in the Claridge apartments on Philadelphia’s Rittenhouse Square. In 1959 the chain was acquired by Jan Mitchell, owner since 1950 of the old Lüchow’s. He revealed that the chain, which consisted of twelve red and gold restaurants, a poorly trained kitchen staff, and a diminishing patronage, had been losing money for the past five years but that he could revive it as he had done with Lüchow’s. Under his ownership the New York units began offering guests the dietary concoction Metracal in their cocktail lounges, as well as free glasses of wine and corn on the cob with their meal. After a couple of years the chain was in the black.

In 1967 Mitchell sold it to the Riese brothers, who owned the Childs restaurants and, with new corporation president Larry Ellman, were in the process of buying up classic New York restaurants – Cavanagh’s in 1968, Lüchow’s in 1969, and others. In 1969 the old Longchamps were mostly turned into steakhouse theme restaurants. The restaurant at Madison and 59th, though, was renamed the Orangerie, dedicated to “hedonistic New Yorkers,” and given a “festive mood of Monte Carlo.” Its $8.75 prix fixe dinner came with free wine, “Unique La ‘Tall’ Salade,” and after-dinner coffee with Grand Marnier. In 1971 a single Longchamps operated under that name, at Third Avenue and 65th Street, but I doubt it had anything in common with the classic Longchamps of the 1930s. The holding company “Longchamps, Inc.” vanished in 1975.