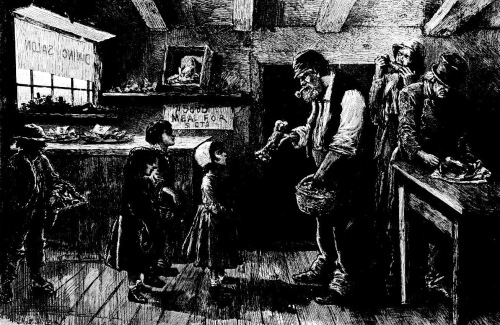 There is a lot of interest now in menus designed for sharing. Groups of friends order a variety of dishes of intriguing appetizers, passing them around so that everyone gets a helping.

Sharing restaurant food has a long history, not all of it so appetizing.

In the 1890s stories appeared in the U.S. press about market stalls in France that sold food left over from the tables of restaurants and hotels. The buyers were those of scant means who needed a cheap meal. What the stories left out was that the custom was not unknown in this country. How common it was is hard to say, but an account in 1874 described an eating place in Philadelphia that sold table scraps from hotels to the city’s poor. [illustration above]

There are two kinds of leftovers in public eating places: prepared food that has not been served and food that has been served to patrons and returned on their plates to the kitchen. The latter is known as comebacks. To what degree food removed from plates was served again to other patrons or added to kitchen stews, hashes, and soups in the 19th century is unknown, but it began to receive attention from health departments in the early 20th century.

Americans became conscious of public health issues in 1906 with revelations about the meat packing industry in books such as Upton Sinclair’s The Jungle. One result of the uproar was that cities and towns that had not already done so expanded the duties of their health departments to include restaurant inspections.

In Los Angeles, inspectors in 1907 discovered that chicken, steak, or chop bones with meat still adhering to them were often added to kettles for stock, soups, or gravies. Somewhat surprisingly, this practice was not likely to happen at the cheapest restaurants. Those selling meals at rock-bottom prices (10 cents) claimed they rarely had any food scraps returned to their kitchens. In a 1908 exposé in a D.C. newspaper, a waiter “told all.” Among his advice to lunch room patrons was to order dry toast with butter rather than buttered toast because in the latter case it was likely to be comeback butter wiped off a plate by the cook’s dirty finger.

Also ranking high on the public’s list of restaurant mystery dishes was hash. Middle-class women, who were particularly distrustful of restaurants’ cleanliness, would only eat it in their own homes or in a genteel, woman-run tea room. Patrons often told the proprietor of a home-style tea room in Bangor ME, “I’m not afraid to eat hash here.”

At least one restaurant, the Pure Food Café in Evanston IL, was so concerned about public perception that it adopted the unfortunate slogan, “We Use No Comebacks.” Perhaps its patrons, mainly students at Northwestern University, needed this reassurance.

Another illicit use of food returned on patrons’ plates was for staff meals. Minnesota’s state hotel inspector declared he would put a stop to it. “We are going to stop the practice of making restaurant and hotel employes eat the ‘comebacks’ that the guests have already dallied with,” he pledged in 1917.

The re-use of comebacks was not a popular topic for public discussion so it’s impossible to gauge how often it occurred or to what degree the practice was halted by inspections. But the problem either persisted or recurred during the Depression, as evidenced by an article in a 1932 issue of the trade journal Restaurant Management.