Lunching at the drug store 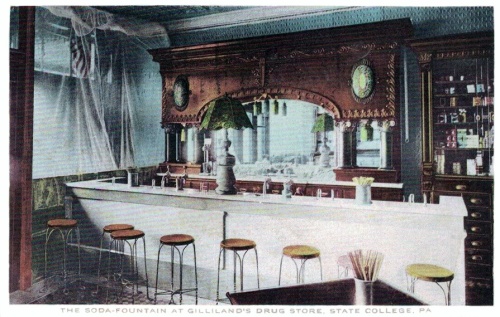 I’ve often noticed how the history of some institution or object does not quite mesh with the nostalgic haze that eventually envelopes it. To a significant extent this is true of now-vanished drug store soda fountains, many of which became places for lunches as well as for sweet fountain treats before they vanished.

Independent soda fountains date as far back as the 1810s. Decades later some druggists began adding soda fountains to their apothecaries, mainly as a favor to their customers. Soda fountain drinks, whether plain carbonated water or water mixed with syrups, were viewed as healthful and in accord with the temperance movement of the 19th century. 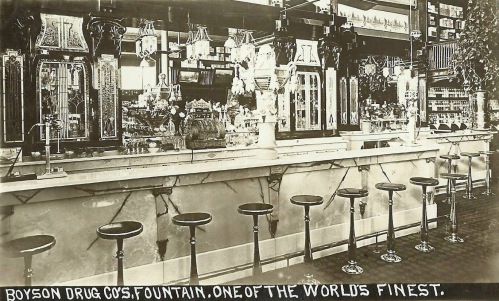 Soda fountains emphasized the elaborate beauty of their fountain apparatus, especially after a marble soda fountain went on display at the 1876 Centennial in Philadelphia. A soda fountain in Boston in 1886 was described as made of “black and chocolate marble, surmounted by a statue of purest marble, representing a dancing girl.” In addition to the artistic features, customers were attracted by the technical aspects of fountains with their tubes and faucets.

In the 1890s druggists began to feel economic pressure to install soda fountains. Apart from drawing people into the store, soda fountains produced good profits at a time when department stores were taking away some of druggists’ business by selling over-the-counter medicines. Plus, the complex range of possible drinks did call upon mixing skills in a way that was at least somewhat similar to what druggists did in compounding medicines. They could reassure themselves — if need be — that they were using “formulas” rather than “recipes.”

In the 1910s, many druggists took a step further and began offering light lunches along with fountain drinks. According to one account, this was a way of ensuring that soda fountain traffic did not die away during lunchtime as it had been doing.

The added profits from selling sandwiches and a few other edibles were welcome but, having spent many years learning their trade, many druggists were depressed about needing to go into what became known as the luncheonette business. A 1914 survey of pharmacists found that most respondents were not thrilled about selling food. Replies included, “Let the hash houses have the pie business.” Some called the situation degrading and asked, “Can we still claim the right to class our calling as a profession?” and “When a man finds it necessary to make a living selling hot dogs, he had better pull in the sign ‘Druggist.’”

Nevertheless the luncheonette business spread and grew, as did druggists’ dependence on this source of revenue. In the 1920s it was not at all unusual to find a luncheonette in a drug store, some even selling hot dishes such as chop suey and tamales. By 1931 an estimate was that nearly half of the 25,000 drug stores nationwide served fountain lunches, with 2,800 doing so in NYC alone. And it was said that some druggists were taking in more money from food service than from everything else combined.

As popular as they were with customers, soda fountain luncheonettes were deeply disliked by catering employee unions, as well as restaurateurs and lunch room owners who viewed them as illegitimate competitors. A 1926 article in the trade magazine Cafeteria Management argued for higher national standards for restaurants, pointing out drug stores as examples of businesses that should not be in the feeding business. To gourmets who mourned the loss of fine restaurants in the 1920s when the sale of alcohol was banned, drug store food exemplified the worst of the worst. Duncan Hines, who began to rate restaurants across the entire country in the 1930s, pointed to the drug store lunch counter as a “sinister influence” and asked, “How in God’s name can anyone who regularly eats drugstore snacks ever be expected to recognize a good meal when it’s served?” Much of the food sold in drug store luncheonettes in the 1920s, was in fact bought ready-to-eat or nearly so from commercial commissaries.

Given all the criticism of drug store lunches, it’s rather surprising to see a menu attachment from Walgreen’s in 1948 and note how closely it resembles a full-scale restaurant, both because it offers 8 “complete dinners” with soup, potatoes, vegetables, roll and butter, desert, and beverage and because it describes the sauces for two fish dishes à la française! Of course it’s likely that the big drug store chains met a higher standard of cleanliness and food quality than many of the small stores had in earlier decades.

Drug store lunch counters were still sufficiently popular in the early 1960s that they, along with dime store counters, were sites of Black protestors claiming a right to patronize them. Notably, a 1951 report of the Congress for Racial Equality cited Walgreen’s stores as among the very few eating places in St. Louis that served Black customers.

By the 1970s drug stores were beginning to close their lunch counters. As early as 1970 Walgreen’s operated only one in New York City, down from 17. Whelan’s too had closed most of its counters there. The trend swept across the country and by the 1980s, nostalgia attached to the few left, most of which were limited to serving sodas and ice cream concoctions. Bitterness among druggists is long forgotten, along with other complaints. Now the best way to find any still in existence is to search for “old-fashioned soda fountain.”

11 responses to “Lunching at the drug store”