Dining during an epidemic

1918 was an extremely challenging year for restaurants. As if coping with the (so-called) “Spanish” flu weren’t bad enough, there were food shortages and rationing due to WWI, a shortage of employees, and looming national prohibition of alcohol. 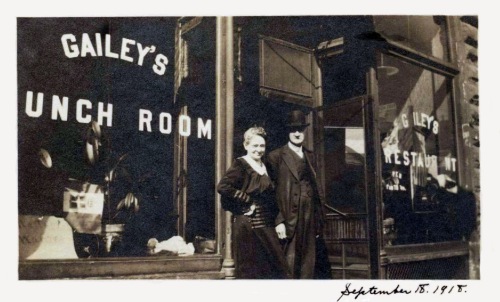 And yet the proprietors of Gailey’s Lunch Room in Chicago look quite content in September of that year. Only six days later, on September 24, a headline in a Chicago newspaper would read “Influenza Hits City.” Then on Oct. 1 a story titled “Spreading Rapidly” reported that 372 cases had been identified in the past 24 hours. On Oct. 3 another story appeared warning Chicagoans that if they coughed or sneezed while on the street, they should expect a policeman to tap them on the shoulder and ask if they had a handkerchief.

Before it ended the Spanish flu, and its associated pneumonia, would kill as many as 675,000 Americans – many in the prime of life, including more soldiers than died in combat. The Gaileys, however, survived the epidemic and were still operating their lunch room in 1920. 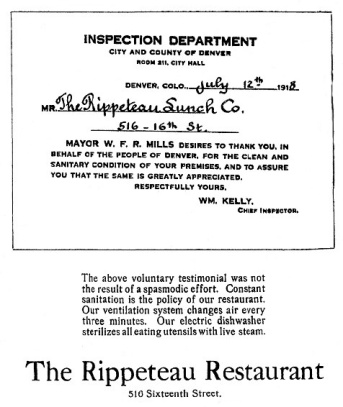 All over the country municipal authorities enacted measures intended to halt the spread of the flu. Most of the orders and bans issued by cities were aimed at reducing congestion, particularly in downtown areas. They could range from staggering closing times in stores and offices to limit crowding on public transportation to completely shutting down businesses. Spitting on the street could bring a fine in Seattle. Shaking hands was advised against in New York City where the death rate recorded for week three of the epidemic was 1,972. As the flu spread, many theaters, pool halls, bowling alleys, ice cream parlors, and soda fountains across the country were summarily closed for the indefinite future. Some cities asked residents to stay away from downtown at night. In some places, public funerals were not permitted, courts were suspended, schools were closed, and sporting events and meetings were canceled.

Restaurants were sometimes ordered to close early, but they were not generally shut down unless they persistently violated the more stringent health department rules being handed down. Unlike now, when going out to eat is often regarded as a leisure activity, restaurants and lunch rooms of the early 20th century were primarily seen as essential services for people living in rooming houses, those working in central business districts, and transients. In Alliance, Nebraska, on October 20, 1918, when the city was placed under quarantine and patrolled by Home Guards, and all businesses were closed, restaurants — the one exception — remained open.

However, restaurants had to adapt to new health department laws. The most common one across the country was that all dishes, glasses, and silverware had to be sterilized by immersion in scalding hot water. Rather surprisingly, this had not previously been normal practice. Nor had the use of glass covers for food on display. 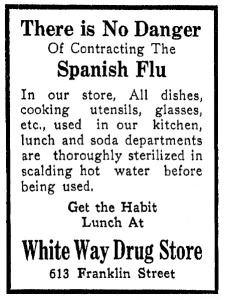 Denver CO and Duluth MN were among the cities that ordered patrons to be given extra space. Duluth’s ordinance stated “That restaurants, cafes and eating houses shall be limited to accommodate one person to each 20 square feet of floor space.” Denver restaurant proprietors were not allowed to continue the practice of closing off part of the restaurant and seating all the patrons in one area. At the end of October, when Seattle officials ordered all non-essential employees to stay home from work, they considered further limiting the number of people who could be admitted to restaurants. At that time Seattle also required restaurants to leave doors open for ventilation. Because of the ban on overcrowding, patrons of some restaurants in Washington, D.C., were forced to wait in lines outside.

What restaurants could serve also came under scrutiny. Some cities did not allow restaurants to operate bars, or to serve alcohol at all, presumably because it encouraged congregating and lingering. It’s a puzzle to me why in Harrisburg patrons could not simply order pie and ice cream unless it was preceded by a regular meal. Maybe it was deemed too frivolous and a waste of space that could be occupied by serious eaters.

How effective all these measures were is unknown, although progress in restaurant sanitation was made. The sterilization rule was surely an advance over earlier dishwashing methods, as were glass cases.

It is also unknown how many restaurants suffered financially or closed during the months of 1918 that the flu raged in the U.S.A. Other than Rippeteau’s in Denver and White Way Drug Store in Tampa [above], in my fairly lengthy search I found no additional restaurants advertising that they were safe. It seems as though only a few places acknowledged publicly that anything abnormal was happening, perhaps because no one wanted to focus on the situation any more than they had to.

9 responses to “Dining during an epidemic”