A Valentine with soul (food)

As we drove by this place in Colorado Springs last month I realized I was looking at a vintage Valentine diner, a prefabricated building type made in Wichita, Kansas. Later I went back and took the photo of it shown here.

One thing about diners, they have so many fans that they have been well documented. On the Valentine diner website, I learned that this was a Little Chef model produced in the late 1950s. This particular Little Chef has had many owners and proprietors since its debut in Colorado Springs.

In my postcard collection I have another Valentine diner, Paul’s Café in Smith Center KS, operated in the 1950s by Paul Manchester and his wife Gleam. The section on the left appears to be Valentine’s late 1940s-early 1950s Economy Sandwich Shop model which contained a counter with only eight stools. It was evidently expanded with a dining room section, shifting the entrance to the red door in the middle. The awnings probably were not original to the design. 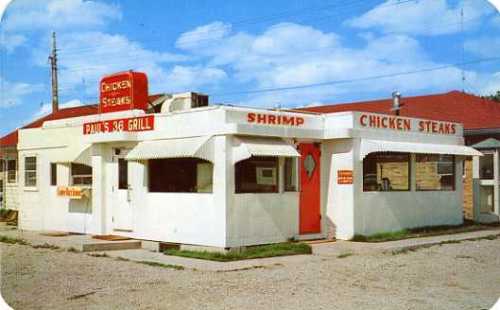 8 responses to “A Valentine with soul (food)”