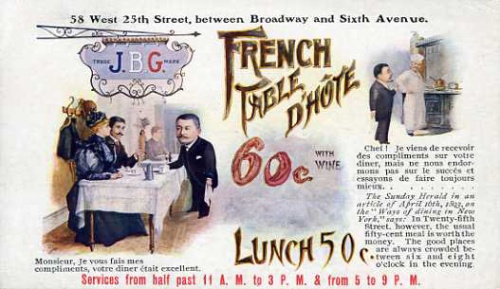 Last weekend I went to an antique paper show sponsored by the Ephemera Society of America where there were books and every sort of printed thing — maps, advertising cards, tickets, menus, postcards, posters, broadsides — for sale. I ended up buying only seven items, but one of them (shown above) was a gem.

I knew as soon as I spotted it that it was a relic of New York City’s old French quarter in which many restaurants flourished in the 19th century. The card probably dates from the latter years of the quarter, about 1904.

J.B.G.’s was operated by Jean Baptiste Guttin, who immigrated to the United States in 1872 and became a citizen in 1892. For many years he worked as a waiter at wine merchant Henri Mouquin’s well-known restaurant on Fulton Street. Then, in 1890, he took over a restaurant formerly run by A. Fourcade on West 25th street. Within a few years he changed the name to J.B.G. and moved down the street a bit. 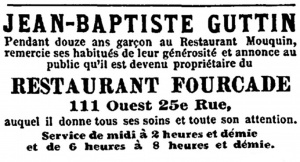 Beginning in the 1890s the area from West 23rd to West 28th streets near Sixth avenue was the heart of the French quarter, which was said to be as much or more of a tight-knit community than the Chinese. It had earlier been situated farther downtown, south of Washington Square. By 1895 West 25th was the new restaurant row for French New Yorkers. The restaurants were also patronized by others who lived in the area, as well as adventurous “Bohemian” diners who came to soak up the atmosphere. Of course they also liked getting a six-course meal with red wine and coffee for 50 or 60 cents.

Described in the 1903 guide book Where and How to Dine in New York as “very French,” J.B.G.’s was a truly old-fashioned table d’hôte in that customers had no choice in dishes and didn’t know what they would be eating until it was set down before them.

Jean Baptiste Guttin was successful in the restaurant business. When he died in 1914 he left the then-considerable sum of $4,000 to NYC’s French Hospital as a way of thanking the late chocolate-maker and restaurateur Henry Maillard for advancing him a loan of the same amount “in a moment of difficulty.”

13 responses to “Find of the day: J.B.G.’s French restaurant”