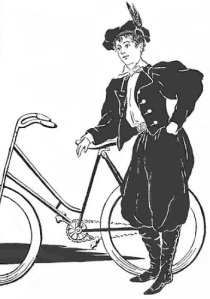 The bicycling craze of the mid-1890s brought “wheelwomen” dressed in bloomers into public view. It didn’t take long for enterprising restaurant men to latch onto the sensational pants-like garment as a waitress uniform. It was the middle of a nationwide depression and they hoped that male customers would flock to their establishments and the money would pour in. And this proved true, sort of.

Bloomers were originally a pragmatic garment of the 1850s woman’s rights movement intended to permit women to conduct everyday affairs without dragging 50 pounds of skirts and petticoats over filthy floors and streets. They were designed to do this by raising the skirt hem up to the shoe tops — with long gathered trousers worn underneath to modestly hide the ankles. But because of relentless ridicule, prior to the bicycle craze they had been worn only in private or in exceptional situations: doing gymnastics, while housecleaning, or by Westward-bound women crossing prairies and mountains.

The bloomers worn by female cyclists in the 1890s were more daring than those of the 1850s because they ended just below the knee, revealing stocking-covered calves and ankles. When “waiter girls” (as waitresses were known then) wore them, crowds of men gathered on sidewalks outside restaurants, jostling for a view. Although some restaurant owners claimed that bloomers were more practical than long dresses, it was pretty clear that most were motivated by a wish for publicity. 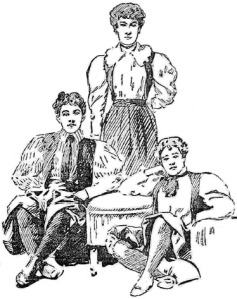 The bloomer uniform typically consisted of full-cut navy, brown, or black serge pants gathered at waist and knees and worn with a short matching vest (pictured on San Francisco waitresses) or “Zouave” jacket, and a colored blouse with leg o’mutton sleeves. Often the outfit was accessorized with black stockings, patent leather slippers, and caps imprinted with the restaurant’s name.

The first restaurant to adopt the fascinatingly curious uniform, in 1895, was the Bloomer Café in San Francisco. It was rapidly followed by restaurants in St. Louis and NYC. In 1896 and 1897 a few more opened in NYC, in Oakland CA, Chicago, and — gasp! — Boston. The police immediately closed the Chicago café on moral grounds. But they all seem to have been short-lived, usually because the crowds stopped coming once the sensationalism wore off.

Waitresses sometimes balked at bloomers because they feared they would be “on exhibit” and treated crudely by male patrons. Those who did agree to wear them, under threat of losing their jobs, reported that although they missed the “swish” factor of layers of starched skirts, they liked the new style because it enabled them to move quickly without trailing hems to get stepped on or slammed in doors.

Restaurant bloomers were an interesting example of a style crossing under coercion from one social class to another. Bloomers were seen as symbolic of the “new woman” – a decidedly privileged, well-educated, independent-minded daughter of the middle class. The new woman loved riding bicycles and engaging in sports. Working class women, by contrast, did not typically ride bicycles, play tennis or golf, or exercise in gyms. More than one bloomer waitress disclosed upon being interviewed that she had never been on a bicycle.

By 1898 the restaurant bloomer fad was over, but the idea of dressing waitresses in eye-catching costumes was only beginning.