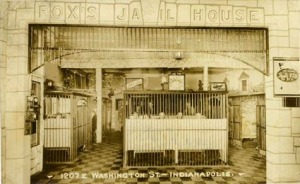 I’ll admit that I’m not fond of theme restaurants. So often they seem designed for tourists who will never return and, therefore, don’t get very good treatment. Food is often a secondary consideration, mediocre at best, while the entertainment is hokey.

Yet obviously many people enjoy places that allow them to escape their everyday lives for a few hours. What kind of escape does a prison concept provide? Appreciation of freedom? The opportunity to tell friends “I was in jail last night”?

Whatever it may be, it’s never been a common restaurant motif, yet it endures today. The theme can be traced back to 19th-century Montmartre’s Café of the Penitentiary (Café du Bagne). The beat was picked up in the US by “beefsteak dungeons” that sprang up around 1900. In another variant, Don Dickerman led patrons down into a dark cellar, the brig, in his Pirates’ Den in the Greenwich Village of the 1920s, which he recreated in Miami, Washington, and Hollywood CA (shown) in the 1930s and 1940s.

Los Angeles was host to several jail theme eating/entertainment venues, the first in the early 1920s when LA entrepreneurs were eager to cash in on the popularity of Greenwich Village by creating outlandish eating places that resembled the Village’s. One LA attraction was a coffee shop largely patronized by sailors where the walls were painted to resemble the stone walls of a prison on which patrons scrawled their names. Then, in 1925, The Jail opened on Sunset Boulevard. Each table occupied its own barred cell. Just like in Montmartre of the late 1800s, waiters dressed as convicts — the bitterly ironic yet unconscious American twist being that they were black men.

Within a year the proprietors of The Jail opened a second place. This location, or perhaps the first, became the set for two movies which have subsequently fallen into obscurity: Sweet Daddies (silent, 1926) and Ragtime (1927).

The Jails featured chicken dinners. Diners were furnished with no knives or forks, thus carrying on the beefsteak dungeon’s “caveman” tradition of eating with the hands. In 1930 a newspaper columnist named The Jail as one of the “seven wonders of Hollywood,” along with the Hollywood Bowl and the residence of Harold Lloyd. That honor may have marked its swan song as it seemed to disappear around then.

There were also jail-themed restaurants in other parts of the country. Depression-era Indianapolis had Fox’s Jail House Restaurant (shown above) where the “inmates” ate behind bars, while Fairfield, Iowa, enjoyed Turner’s Jail Café where, in 1939, Mr. and Mrs. Turner invited guests to Eat (plate lunches) at the Jail!

Believe it or not, the macabre subject of execution has also served as a theme for some eating places, such as The Noose Coffee Shop located across from Chicago’s Criminal Courts building in the 1920s. It supplied condemned prisoners with their last meals and they reciprocated with autographed photos. In the 50s, 60s, and 70s, Tarzana CA had a jokey place called The Hangman’s Tree Café, whose menu cover featured a noose dangling from a tree and the slogan “Jail Fare.” Although it was presumably meant to invoke the Wild West I feel reasonably certain not many black guests chose to accept the invitation to “hang out” there. I almost hate to mention the Taipei, Taiwan, restaurant called The Jail which in 2000 was grotesquely (but briefly, following public outcry) decorated with photo murals of emaciated prisoners of German concentration camps and a sign for the rest rooms that read “gas chamber.”