Anatomy of a restaurateur: Dario Toffenetti 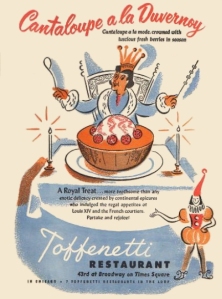 Who would predict that a boy growing up in the Austrian Tyrol in the 1890s would make his fortune by selling Idaho baked potatoes? But that’s exactly what Dario Louis Toffenetti did. Born in 1889, he came to the U.S. in 1910, allegedly after being recruited to peddle ice cream from a cart in Cincinnati. Disillusioned with that project, he soon traveled westward, selling baked potatoes at a Wisconsin mining camp, then becoming a bus boy at the dining room of Chicago’s Sherman House. In 1914 he opened his first restaurant in Chicago.

He was ambitious and would quickly develop into a canny marketer. In 1916 he enrolled in night school at Northwestern University’s School of Commerce. In 1921 he opened his second restaurant, on S. Clark. At a time when advertising, marketing, and public relations were making giant leaps forward, he was quick to implement the latest tactics. He advertised heavily and “named” the food sold in his restaurants. When he promoted ham, it was not generic ham but “Roast Sugar Cured Ham” from packer Oscar Mayer. (“It’s no wonder these Ham Sandwiches make your mouth water! Oscar Mayer’s ‘Unusually Good’ Approved Hams are used.”) By 1937 he had six restaurants in the Chicago Loop under the name Toffenetti-Triangle.

According to accounts, “D. L.” wrote his own colorful advertising copy, such as, “These hams are cut from healthy young hogs grown in the sunshine on beautifully rolling Wisconsin farms where corn, barley, milk and acorns are unstintingly fed to them, producing that silken meat so rich in wonderful flavor.” Equally over the top was his copy for Idaho baked potatoes, with references to a “bulging beauty, grown in the ashes of extinct volcanoes, scrubbed and washed, then baked in a whirlwind of tempestuous fire until the shell crackles with brittleness…” Customers who had not previously eaten baked potatoes soon learned to ask for “an Idaho.” Another heavily promoted dish, “Old Fashioned Louisiana Strawberry Shortcake,” was “topped with pure, velvety whipped cream like puffs of snow.”

To build trust with an always-skeptical public, he featured himself in his ads (bald head and all), often adding his signature. In a 1930s Depression advertisement (pictured), he pledged to keep prices low without reducing quality. When Prohibition ended, he announced that he would serve beer, but not “in any fashion that might offend our most fastidious women patrons.”

Another factor in his success was winning catering contracts at two world’s fairs, Chicago in 1933 and New York in 1939-40. Following the NY fair he outbid Louis B. Mayer for an immensely valuable piece of Times Square real estate on the corner of 43rd and Broadway. He hired Skidmore, Owings & Merrill to design a two-story, glass-fronted moderne building (pictured), outfitted with an escalator and a show-off gleaming stainless steel kitchen. The restaurant served 8,500 meals on opening day.

Dario was president of the Chicago Restaurant Association for seven terms (1936-1943). After his death in 1962, the business was conducted by other Toffenetti family members until about 1980. The Times Square restaurant closed in 1968.

Unlike many other immigrant restaurant operators who were characterized (often unfairly) as running “holes in the wall,” Dario Toffenetti was celebrated by the organized restaurant industry as a model progressive restaurateur.

60 responses to “Anatomy of a restaurateur: Dario Toffenetti”