You want cheese with that?

It seems as though almost all of history’s food forces have cooperated to give cheese top billing in restaurant meals today. Only one cheesy custom failed to catch on, that of finishing a meal with cheese and fruit as was done in small French and Italian restaurants in the later 19th century. Craig Claiborne argued in 1965 that even the best New York restaurants didn’t know how to handle the cheese course. They had poor selections which tended to be old, overripe, or served too cold. One restaurant admitted their chef was in the habit of popping cheese straight from the fridge into the oven to soften it. Restaurateurs that Claiborne interviewed insisted that Americans didn’t like cheese after a meal. I’d agree that most prefer their after-dinner cheese in the form of cheesecake.

Cheese has been a staple food in American eating places probably since the first tavern opened. Regular meals were served only at stated hours but hungry customers could get cheese and crackers at the bar whatever the hour. For “Gentlemen en’passant,” the Union Coffee House in Boston promised in 1785 that it could always furnish the basics of life: oysters, English cheese, and London Porter. Across the river in Cambridge, the renowned Othello Pollard, aka “the Prince of Creams,” specialized in epicurean cheesecakes in 1805. By the 1850s, English chop houses in the East were famous for their Welsh rarebits, while pie came with a wedge of cheese just about everywhere.

When Germans immigrated to America in the 1850s and 1860s they brought their fondness for Limburger, often ridiculed in the press. The Italians introduced grated Parmesan for pasta dishes, as well as risotto, macaroni and cheese, and cheese-filled ravioli. In the late 19th century cheese became a standard item at “free lunch” counters in saloons, and many allegedly exhibited a solitary dried-up cheese sandwich as proof of their status as genuine restaurants during anti-saloon crackdowns in the early 20th century. In the 1920s toasted cheese sandwiches of all varieties became luncheonette favorites. 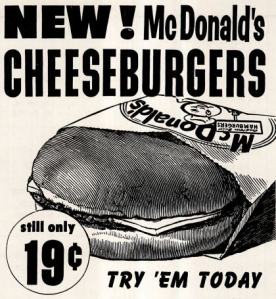 Cheeseburgers were a product of the fast food industry of the 1920s, claimed as inventions by both the Rite Spot of Southern California and the Little Tavern of Louisville. Strange there aren’t thousands of other contenders because what was there to invent, really? Cheeseburgers were strongly associated with Southern California before WWII — Bob’s Big Boy of LA introduced cheeseburgers in 1937. Another step forward came in the 1930s when a bill was introduced in the Wisconsin legislature requiring restaurants and cafes to serve 2/3 oz. of Wisconsin cheese with every meal costing 25 cents or more. In the same decade Kraft Cheese was among major food producers providing restaurants with standardized recipe cards.

It was after WWII that cheese spread its melted gooeyness everywhere — on pizza, hamburgers, Mexican dishes, and pasta, until today, well … just picture TV advertisements for TGI Friday and Olive Garden. Mass-produced cheesecake made its restaurant debut around 1950. McDonald’s introduced cheeseburgers in 1960. In the 1970s vegetarian and health food restaurants fell in love with dishes such as 7-cheese meatless lasagna, cheese-stuffed cauliflower, and cheese-smothered veggies on brown rice. From 1960 to 1978 annual cheese consumption doubled from 8.3 to 17.4 pounds per capita. Now we each eat close to 34 pounds of cheese a year, mainly on pizza and hamburgers.

4 responses to “You want cheese with that?”