The London Chop House, Detroit’s 21 Club, enjoyed a ranking as one of the country’s top restaurants in the 1950s, 1960s, and 1970s. James Beard named it as one of the ten best restaurants nationwide in 1961, the same year it won a Darnell Survey award as one of America’s Favorites. It won Holiday magazine awards repeatedly. Honors continued throughout the 1970s, and in 1980 it made Playboy’s top 25 list. 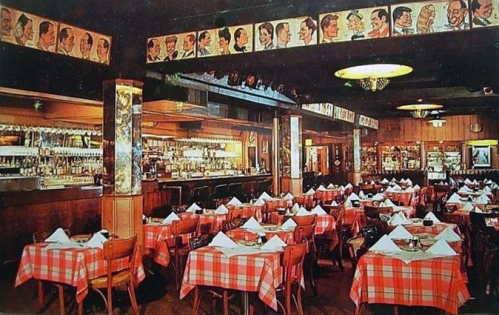 Established following Repeal in the 1930s by the Gruber brothers, Lester (shown below, 1955) and Sam, it soon became a magnet for business executives, celebs passing through Detroit, and power elites of all stripes. Its attractions were many, including evening entertainment, a fine wine list, and fantastic concoctions from the bar. (Absinthe anyone? See 1945 drinks menu below.) Its chefs, among them Eddie Dobler, “Pancho” Velez, and Jimmy Schmidt, were known for their preparations of freshwater perch and whitefish from Michigan’s lakes and rivers as well, of course, for beef dishes aplenty. 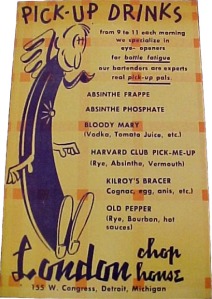 The Grubers were adept at flattering the male ego. When a guest made a reservation, he would arrive to find his table with books of matches and a reserved sign all imprinted with his name, as well as a card with a coin in a slot reimbursing him for his phone call. Alpha types jostled for table #1, while regulars glowed with the knowledge that their suavely jacketed waiter had remembered how many ice cubes they liked in their highballs. To keep up with escalating demand, in 1952 the Grubers opened a second place across the street, the Caucus Club. The 1980s turned out to be a tough decade for the Chop House. Les Gruber sold it in 1982, chef Schmidt left, and the new owner passed away. Despite efforts to keep it afloat, it closed in 1991.

What strikes me from the vantage point of 2009, as I look at recipes and depictions of popular dishes at the Chop House, are both the food shortcuts employed and the richness of the ingredients used, characteristics which mark it as a mid-20th century American restaurant. It was typical of the times, I know, but it still surprises me that a restaurant with sky-high prices (easily running up to $50 a person for food alone in the 1970s) would bake carrots with “maple flavored” syrup, stir onion powder into mashed potatoes, and dissolve chicken bouillon granules into their watercress soup.

As for fat and cholesterol, the phrase “the better to kill you with, my dear” keeps running through my mind. Good thing those power lunchers had strong metabolisms. Either that or they needed to chop wood after a meal if they were to survive too many drinks like “the hummer” (ice cream, Kahlua, white rum), or eat too many Roqueburgers (beef patties containing Roquefort cheese, butter, and cognac) or corned beef hash topped with crumbled bacon and Parmesan cheese.

Still, even if it did shorten the lives of some auto execs I have to salute a restaurant which itself survived for over half a century.

72 responses to “Famous in its day: London Chop House”