The checkered career of the roadhouse

Before the Civil War roadside drinking and eating places on the outskirts of cities were visited by people who enjoyed making them the destination of a leisurely buggy ride. In winter sleighs full of young people from Boston would go to North Cambridge or Arlington for steak dinners and dancing. Although they sometimes drew a rough crowd, such as the pickpockets and grifters who gathered for cattle fairs and races, these places were generally considered respectable.

As railroads spread across states such as Massachusetts following the war, fares fell and roadhouses drew an undesirable, rowdy crowd. They gradually began to fade away as cities grew. Yet their unsavory reputation lingered and grew more intense with suburbanization in the late 19th century. Minnesota legislated against roadhouses in 1915, and towns around Chicago fought them and often succeeded in having their liquor licenses taken away. Others, however, survived and became legit — for instance Busch’s Grove originally located on the outskirts of St. Louis. 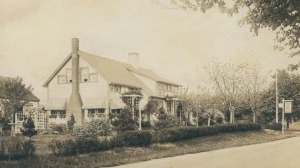 The same reform fervor that attacked drinking (and prostitution) in roadhouses brought new life to them as they were turned into colonial-style “wayside” tea houses by middle-class women in the teens and 1920s. As a writer for Good Housekeeping magazine observed in 1911, these were just the sort of places to appeal to “quieter folks of good taste.” The most famous example, the Wayside Inn of Sudbury, Massachusetts, was bought in 1923 by Henry Ford to rescue it from its alcoholic past.

There were risks in opening a teetotalling establishment in an old watering hole. As the proprietor of a Pennsylvania roadhouse converted into the Huckleberry Inn discovered, old customers had a habit of coming by and demanding their accustomed drinks.

Was this the reason why liquor was found at the Nine Owls Tea Room in Pembroke, Massachusetts, when town police raided it in 1927? The Nine Owls, on Mattakeesett street, was run by Elizabeth Buxton, who had moved to town from Somerville with her family in the 1920s. Had it once been a roadhouse? It is not clear whether she founded the tea room or took it over from someone else, or exactly how long she was its proprietor. In 1932, a year after her husband was struck by a car and killed, she advertised for boarders but I have found no trace of her after that date.

As shown in the accompanying illustration, the Nine Owls eventually reverted to a roadhouse. In this photo, genteel elements from its tea room past such as window boxes, canvas awnings, and flower gardens are missing. A Budweiser sign is prominent. The reputation of the Nine Owls may have been pristine — but to me it has the look of a roadhouse in a Hollywood film noir. Its moodiness reminds me of the image of Casablanca in Palatine, Illinois, scene of a murder in 1949.

The Nine Owls was in operation under that name at least until 1970 when its owner, Edwin Mason, was killed in a motorcycle accident. At some later point the building burned down. 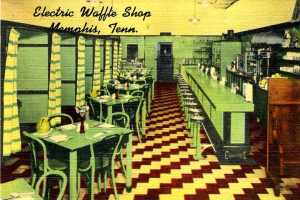 In the early 19th century Philadelphians enjoyed driving their carriages to the falls on the Schuykill River, the area now known as East Falls, then lined with hotels and restaurants. Eating places there specialized in a favorite dish associated with Philadelphia long before the advent of cheese steaks, namely catfish and waffles. (I’d like to believe that the dish did not include maple syrup.)

Jumping ahead some 50 years, waffles also turn up again in Philadelphia as a featured specialty at a Civil War fundraiser in which an old-time kitchen recreated the food and cooking methods of early German settlers. While gazing at souvenirs such as Benjamin Franklin’s desk and a copper kettle used to make coffee for Revolutionary War soldiers, diners could indulge themselves with buttered waffles with sugar and cinnamon, sausages, or “omelette etwas” (scrambled eggs).

Of course waffles could be found in many restaurants over the past 200 years but they seem to have been especially popular in certain places and times. The “Wild West” was well supplied with waffle kitchens and houses. In mining camps and early settlements in Oregon, California, and Colorado waffles turn up on many menus in the 1880s and 1890s. Only in the West was the term “waffle foundry” used to describe lunch rooms like those in Los Angeles where in 1894 “a large waffle, swimming in melted butter and syrup is served for ten cents.” 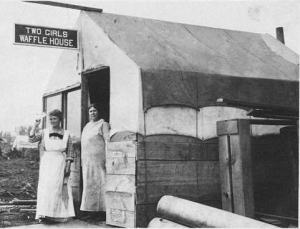 Well into the 20th century waffles were familiar fare in boom towns such as Anchorage, Alaska, and the oilfields of Oklahoma. Around 1915 two young women from Seattle decided to seek their fortune in Alaska with the Two Girls Waffle House (pictured). In what was not much more than a shack with a canvas roof they could handle only eight customers at the counter. But after a year they had made enough money from railroad construction workers to build a permanent structure. A similar success story could be told about the two young men who ran the Kansas City Waffle House in Drumright, Oklahoma, before graduating to a bigger enterprise in Tulsa. 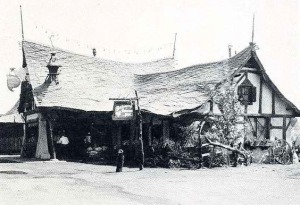 Waffles were also a staple of tea rooms in the early 20th century. In places as varied as big city afternoon tea haunts and humble eateries in old New England homesteads, waffles attracted patrons. In 1917 New Yorkers could choose among the Colonia Tea Room,  At the Sign of the Green Tea Pot, or the Brown Betty for their waffles fix. In the early 1920s, the fantastical Tam O’Shanter Inn of Los Angeles, then known as Montgomery’s Country Inn (pictured), offered chicken and waffles, a common dish at roadside tea rooms then. Tea room and coffee house magnate Alice Foote MacDougall attributed her successful career to the waffles she served in her Little Coffee House Grand Central Station restaurant in 1919.

As the Wells Manufacturing Company, maker of commercial waffle bakers, advertised in 1948: “Look! There’s a lot of Money in Waffles!”

Tea shops were among the earliest restaurants that built their business around customers arriving by car. In the densely populated Northeast in particular, roadways were thick with the small eating places which specialized in lunches and afternoon teas for vacationers. They also made up box lunches for automobile parties and rented out rooms to overnight guests. In hot weather many offered an amenity now vanished, sleeping porches. People who traveled by car in those days tended to be well-off. City tea rooms had already established an upscale cachet and this association no doubt served the roadside places well.

One of the first roadside tea shops was the Tiffin Shop in White Plains, New York, which was in business by 1906. A story in Town and Country magazine titled “A Tiffin Shop for Motorists” noted it featured “cool green tints and Japanese prints, mission furniture, nasturtiums on the tables, a tinkly wind-harp,” as well as sandwiches, salads and “cake served on an embroidered doily.”

Most of the tea rooms and shops in outlying areas were run by women in their own homes. Letters to advice columns such as the following from “Flora” in 1909 show how eager many were to earn money using their housewifely skills: “I am thinking of starting a wayside inn or tearoom for ‘autoists’ this summer, and would ask you to give me some ideas if you will. I have thought it best to serve some ‘specialties.’ We have a grand empty front room and a beautiful, wide, grassy front yard for resting. Any suggestions as to furnishing room, menu, and way of serving would be a great help.” Included in the column’s advice was to use the finest ingredients and hang a sign featuring a teakettle.