Tea at the Mary Louise

In 1914 the J. W. Robinson department store arrived on West Seventh and Grand, launching a shift in Los Angeles’ shopping district from Broadway. The following year the Brack Shops began leasing specialty shops in an empty loft building nearby. Construction activity boomed as Seventh Street turned into a shopping mecca.

Will and Dolla Harris staked the future of the Mary Louise Tea Room on the prosperity of West Seventh. In 1918 they opened their first tea room on the 12th floor of the Brack Shops. With wide hallways allowing shops to open their doors and let goods spill outside, it resembled a modern-day shopping mall. Shoppers could easily spend the day having their hair done, browsing the latest styles, or enjoying lunch, tea, or a Thursday night chicken dinner at the Mary Louise.

Through the 1920s the Mary Louise expanded, opening additional tea rooms on West Seventh — on the mezzanine of the fashionable New York Cloak & Suit House, and on the top floor of the gigantic Barker Brothers home furnishings store [shown here]. In 1922 construction began on what would be the largest of the Mary Louise tea rooms [shown below], a two-story building across from Westlake Park (renamed MacArthur Park in 1942). It opened in 1923 and was soon followed by a Mary Louise in Fullerton, next door to the new Alician Court movie theater owned by Dolla’s brother Charles S. Chapman. The last Mary Louise, whose servers were young Asian-American women dressed in Chinese costumes, opened in 1931 on North Cahuenga in Hollywood.

Shortly after its debut, the park-side Mary Louise advertised it was “the Center of the City’s Social Life.” Wedding parties and meetings of professional groups were booked regularly. Elaborately decorated on a lavish budget equal to more than half the cost of construction, the capacious building held a large entry hall [shown below] and dining room [shown at top] on the first floor plus an afternoon tea room, a banquet hall, and four smaller dining rooms for private parties on the second. In sync with the fashion of the day, the rooms had themes such as Mah Jong and Italian tea garden. 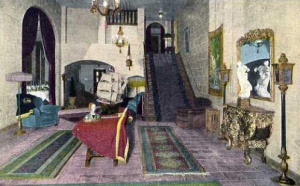 As can be seen on postcards from the Mary Louises in Barker Brothers and opposite Westlake Park, the tea rooms were decorated in glamourous movie-set style markedly different than minimalist Eastern tea rooms. Gilded pieces, Oriental rugs, wall tapestries, heavy draperies, and paired ornamental trees abounded.

The Mary Louise mini-empire was dealt a severe blow just a few months after the Hollywood location opened when Will Harris died suddenly. Three of the tea rooms, including the main one opposite Westlake Park, were quickly sold to the Elite Catering Company owned by the expanding Pig’n Whistle chain. When I acquired the business card shown here opened up, it had Xs penciled over all but the section reading “2 Smart Downtown Tea Rooms,” evidently reflecting the changeover.

Dolla Harris continued to operate the two downtown tea rooms: in Barker Brothers and in the Security Bank Building opposite the Robinson’s store. In 1932, in the depths of the Depression, she was forced to reduce prices for lunch and to attract customers with palmists and numerologists. How long she stayed in business is uncertain but I’ve found evidence that there was still a Mary Louise tea room in Barker Brothers in 1952.

9 responses to “Tea at the Mary Louise”