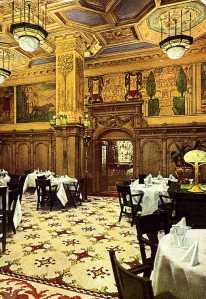 Men’s grills were often located in hotels or were set off as special preserves in venues heavily trafficked by women such as tea rooms and department stores. Schrafft’s, Stouffer’s, Mary Elizabeth’s, Marshall Field’s all featured men’s grills. Designed to resemble clubs, they were decorated in Elizabethan or Dutch style with dark wood paneling and sturdy tables and chairs, in stark contrast to the pastel garden look of women’s tea rooms. Women secretly referred to men’s grills as “tea rooms for men.”

There were plenty of grill-type restaurants in the 19th century – when they needed no gender preface because everyone knew they were men’s haunts. But in the 20th, with more women out and about and entering restaurants willy nilly, the words “men’s grill” were used deliberately lest a misguided female might wander in. Policies varied. In some men’s grills absolutely no women were allowed while in others men could bring women guests (see 1966 Schrafft’s ad). But women “alone” were not admitted. Not until the 1970s, that is.

In May 1970 a prominent NYC editor, a woman, walked into Schrafft’s on the corner of 47th Street and Third Avenue with another woman. They noticed that at the back of the restaurant there was a section that looked especially attractive, with more space between tables, tablecloths, and carpeting that cushioned noise. The hostess told them it was the men’s grill and they were not permitted to eat there. They left. The editor sent a letter to Schrafft’s saying that although she was no “stirred-up advocate of Women’s Lib,” she was offended by the restaurant’s policy which, she asserted, was illegal. She received a reply from a Schrafft’s VP who said that the restaurant no longer had a policy of reserving some areas for men. The hostess’s reaction, he said, was due to a breakdown of communication.

Stuffy as they may have been there was much to envy about men’s grills. As a Chicago woman remarked, they had “fast service, good food, and cheaper prices than a comparable restaurant.” She and a woman friend crashed the men’s grill at the Carson, Pirie, Scott department store in Chicago, noting that a male patron there asked the hostess, “Why don’t you throw them out?” They enjoyed their lunch even though their waitress said, “Don’t you know men come here to get away from you?”

The 1964 Civil Rights Law did not mention gender as a basis for discrimination in public accommodations, but after its passage some cities and states enacted laws that forbade it in restaurants and bars. Chicago passed legislation in 1969. McSorley’s ale house in Greenwich Village, with a 116-year tradition of serving men exclusively, gave way in 1970 after the NY city council passed a bill. Even in states without this legislation changing social mores soon brought about new policies. Men’s grills disappeared, to the consternation of some men who, like the lone dissenter on NY’s city council, lamented, “In this troubled world there has to be an oasis in the desert for men.” However, judging from a 1970 comic book, many men disagreed.