It is the dawn of the modern era of restaurant-ing. Patronage grows at a rate faster than population increases and the number of restaurant keepers swells by 75% during the decade. Leading restaurant cities are NYC, Philadelphia, Chicago, San Francisco, and Boston. Inexpensive lunch rooms with simple menus and quick service proliferate to serve growing ranks of urban white collar workers, both male and female. Women patronize places they once dared not enter, climbing onto lunch counter stools and venturing into cafes in the evening without escorts.

Cooks and waiters unionize. Restaurant owners follow suit, advocating the abolition of the saloon’s “free lunch,” combating strikes, and targeting immigrants who operate “holes in the wall.” As Italians and Greeks open eating places some native-born Americans complain that foreigners are taking over the restaurant business.

1901 As restaurant patronage rises “foody talk” is everywhere. A journalist overhears people “shamelessly discussing the quantity and quality of food which may be obtained for a given price at the various restaurants.” Hobbyists begin collecting menus and Frances “Frank” E. Buttolph deposits over 9,000 menus in the NY Public Library.

1902 Restaurants automate and eliminate waiters. In Niagara Falls a restaurant devises a system of 500 small cable cars which deliver orders to guests. The Automat opens in Philadelphia, inspiring the city’s Dumont’s Minstrels to create a vaudeville act called The Automatic Restaurant which features “Laughing Pie” and “Screaming Pudding.”

1903 “Where and How to Dine in New York” lists restaurants with cellars where men’s clubs play cavemen and eat steak with their hands. – Hawaiians croon in San Francisco restaurants; ragtime bands play in NYC’s Hungarian cafés; and at McDonald’s (“a touch of Bohemia right in the heart of Boston”) a “Young Ladies’ Orchestra” serenades patrons.

1903 In Denver, where a large part of the population eats out, a cooks’ and waiters’ strike closes large eating places. Strikes break out in Omaha and in Chicago, where a newly formed union rapidly gains 17,000 members. Restaurant owners replace black servers with white women in Chicago, while in Omaha they replace white waiters and cooks with black men.

1905 Five hundred guests of insurance magnate James Hazen Hyde don 18th-century costumes and enjoy a banquet at Sherry’s. Two floors of the NYC restaurant are transformed into a royal French garden and supper is served at tables under wistaria-covered arbors set on a floor of real grass. 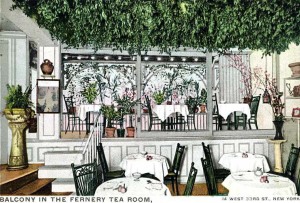 1906 Afternoon tea is so fashionable that NYC’s Waldorf-Astoria supplements the Waldorf Garden space by opening the Empire Room from 4 to 6 p.m. – Italian-Americans Luisa and Gerome Leone start a small table d’hote restaurant in NYC near the Metropolitan Opera.*

1908 Johnson’s Tamale Grotto is established in San Francisco with “A Complete Selection of Mexican Foods to Take Home.” – In Washington, D.C., the Union Dairy Lunch advertises that they have passed inspection with “Everything as sanitary and clean as your own home.”