Catering to the rich and famous 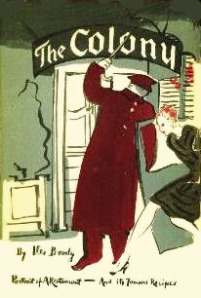 What a pain the rich can be. That’s the message you’ll take away if perchance you pick up The Colony Cookbook by Gene Cavallero Jr. and Ted James, published in 1972. The dedication page is plaintively inscribed by Gene, “To my father and all suffering restaurateurs.” Chapter 3 details what caused the suffering, namely the privileged customers who imposed upon him and his father in so many ways. They stole peppermills, left behind ermine coats, false teeth, and glass eyes, asked for help getting through customs, requested restaurant staff to chauffeur their children – even called for reservations at other restaurants.

The Colony was the kind of place where terrible things could happen such as – oh god! – countesses and rich men’s wives showing up in the same designer gown. Thankfully they were so well bred that instead of pouting or running home to change they bravely stuck out the evening and even managed a smile as they picked at their truffled Salade à l’Italienne and Chicken Gismonda. Over the Colony’s 50 years all the big names from society, politics, entertainment, and royalty patronized it – Kennedy, Onassis, Capote, Dukes and dukes, Roosevelts, Biddles, Lodges, Cabots, and so on. It was referred to as a “boarding house for the rich” because some patrons were there so often. One woman sat in the same banquette and ate the same lunch nearly every day for over 40 years. Yes, she was an heiress. About 85% of the Colony’s customers signed a tab and received a monthly bill.

The Colony opened in 1919, at Madison Ave. and 61st Street. Three years later headwaiters Gene Cavallero Sr. (pictured slicing cheddar for the toffs) and Ernest Cerutti joined with its chef to buy it from its founder, legendary impresario and restaurateur Joe Pani. Pani also ran the Woodmansten Inn on Pelham Parkway where he introduced the world to then-dancer Rudolph Valentino. At the same time Pani managed Castles-by-the-Sea, a Long Island resort featuring the dancing Castles, Irene and Vernon.

According to the official story as told in Gene Cavallero Jr.’s book and just about every other account, the restaurant achieved status shortly after the new owners took over and upgraded it from a drinking hole for “two-bit gamblers.” Then capital-S Society, represented by the W. K. Vanderbilts, latched onto it and made it their headquarters. In fact “the 400″ had already been entertaining there while it was under Pani’s ownership. Gene Jr.’s book implies that Pani did not appreciate fine food but, given that Pani had European restaurant training and his own farm which supplied chickens and vegetables, this may have been an exaggeration. Both Pani and Cavallero claimed to have been the first to serve broccoli to New York’s dining public.

Like so many of its regulars, the Colony had slipped into senescence by the time it closed at the end of 1971. Restaurant critic Gael Greene was shocked to find how “tarnished” it was when she visited it about a year earlier (“how shabby and mundane are the haunts of the very, very rich, and how often undemanding their lamb-chop and tapioca palates”). And yet its faithful clientele didn’t seem to care. Truman Capote cried when it closed.

7 responses to “Catering to the rich and famous”