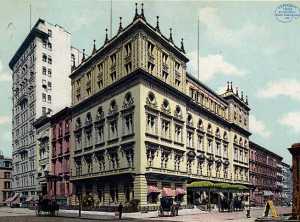 In the 19th century and well into the 20th there was absolutely no doubt that Delmonico’s was the nation’s finest restaurant, the only one with a worldwide reputation. It was one of the few places in this country which European visitors compared favorably with the glittering restaurants of Paris’s “super mall” of the 19th century, the Palais Royal. Founded by two Swiss immigrants in 1827 as a small confectionery shop in New York City, it soon grew into a “restaurant Francais” occupying various locations over its phenomenal 96-year-long run under the same family ownership. As a form of homage — sometimes tongue-in-cheek — restaurants high and low, all over the USA, named themselves after it.

There were, in fact, multiple Delmonico’s. The restaurant moved frequently, but the family always maintained at least one location, less formal and expensive, primarily for businessmen. While it stayed put in lower Manhattan, the fashionable  Delmonico’s gradually moved up Fifth Avenue, following in the path of its wealthy society patrons. In 1862 it moved into an elegant mansion at Fifth Ave and 14th Street and in 1876 jumped up to 26th(shown here later, when it was Cafe Martin). In 1897 the restaurant settled in its final location shown above, at 44th Street, where it faced off with arch-rival Sherry’s.

For a long time Delmonico’s menu was entirely in French, without translation, and a la carte only. This presented a challenge to guests who knew no French and lacked the skill of ordering a perfectly composed meal. If a guest ordered badly he (only men were given this task) imagined he could hear his waiter snickering. And he might end up with a dinner of pickles and brandied peaches as happened to one hapless patron. The solution, of course, was to throw yourself on the mercy of the waiter and ask for his recommendations.

In 1897 Delmonico’s yielded to music and smoking in its hallowed halls, a sign many regarded as evidence of a downhill slide. It closed in 1923, a victim of weak management, increasingly informal dining customs, and Prohibition.

One response to “America’s finest restaurant”